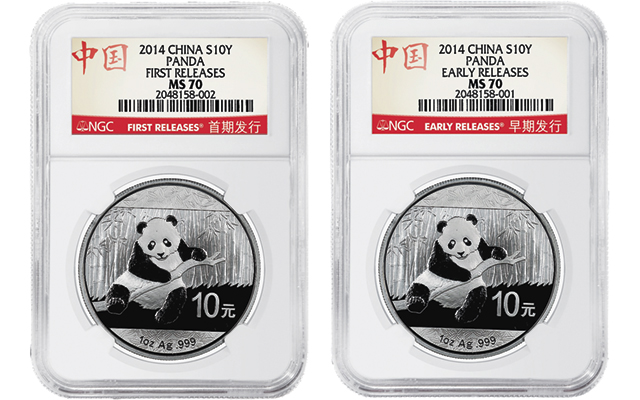 Numismatic Guaranty Corp. announced Sept. 23 that it would begin to offer its Early Releases and First Releases designations for several Chinese coin series on Chinese and English bilingual labels.

These labels have the Chinese symbols for China in the upper left, and a red strip at the bottom that features, next to the NGC logo, EARLY RELEASES /???? or FIRST RELEASES /????.

According to NGC’s Max Spiegel, “We consulted with bilingual members of our staff as well as major customers in China to determine the most appropriate translation.”

NGC uses the Early Releases and First Releases designations to identify coins received by NGC within 30 days of a coin program's initial release. These designations recognize that many collectors prefer to purchase modern coins soon after their release, according to NGC.

The 2015 Panda and Year of the Goat series will be among the coins eligible for NGC’s Early Releases and First Releases labels if submitted within 30 days of their release.

Release dates for those coins have not been announced publicly, but in 2013, China Gold Coin Incorporated used the Beijing International Coin Exhibition to begin launching the annual Panda coins for 2014. The 2014 edition of that show is scheduled for Oct. 24 to 26.

Early Releases and First Releases coins are grouped together under the Early Releases designation in the NGC Census and their population appears beneath the nondesignated issues.

Coins for Early Releases or First Releases designations must be submitted under the “Modern Special” or a higher tier.

Coins must arrive within the first 30 days of their release by the mint. They should be removed from official Mint packaging and submitted raw in flips or in capsules. Coins being sent directly to NGC or an official submission center do not need to be accompanied by original packaging or shipped in sealed Mint boxes.

For additional information, or to use the service, telephone NGC Customer Service at 1-800-642-2646 or email it.