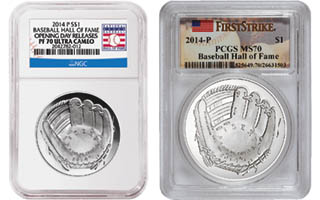 NGC and PCGS are using various special labels for the Baseball coins.

Images courtesy of NGC and PCGS. 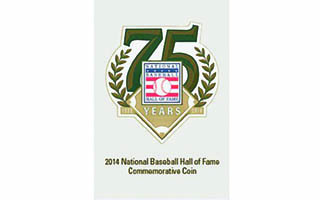 The coin show was the first opportunity for Mint customers to obtain the coins directly after purchase.

Sales for the Proof and Uncirculated concave obverse and convex reverse gold $5 half eagles, silver dollars and copper-nickel clad half dollars began March 27.

Paul A. DeFelice, vice president of marketing and client relations for ANACS, said March 25 that the grading service would not be certifying the baseball coins because the current ANACS holder will not accommodate the dimensions of the coins.

Both NGC and PCGS will have multiple grading label inserts available during program sales for the Baseball coins.

Max Spiegel, vice president of sales and marketing for NGC’s parent firm, Certified Collectibles Group, said NGC is the only grading service authorized to use the National Baseball Hall of Fame logo.

Brad Horn, spokesman for the National Baseball Hall of Fame and Museum in Cooperstown, N.Y., confirmed March 25 that NGC has the licensing rights to use the logo on its products involving the Baseball coins.

An undisclosed portion of the NGC grading fees for those coins certified with labels bearing the National Baseball Hall of Fame logo will be paid to the Hall of Fame and Museum to benefit its operations.

NGC’s special labels for the Baseball coins purchased March 27 at the Whitman Expo and encapsulated by NGC will identify the coins with their grade, the National Baseball Hall of Fame logo, and the pedigree OPENING DAY RELEASES.

NGC also has available, at the customer’s request, grading labels with the Hall of Fame logo and designation under the Early Releases and First Releases options.

Full details can be found on NGC website at www.ngccoin.com.

NGC secured licensing rights to include the authorized facsimile signatures.

Spiegel said March 25 these Hall of Fame authorized facsimile signature labels will be available from select retailers when the coins are released to the public. Spiegel did not disclose which NGC-authorized retailers will be offered the facsimile autograph option.

Both were offered under the First Strike program and with an American flag in the upper left corner, with one of the labels blue and the other with full-color imagery featuring a baseball.

Both labels identify the certifications as FIRST PITCH BALTIMORE.

Miles Standish, senior grader and vice president of business development for PCGS, said both of the special Whitman Baltimore Expo grading labels were available to collectors at the collectors’ discretion.

A grading label with the same full color imagery depicting a baseball but without FIRST PITCH BALTIMORE will be used by PCGS for a First Strike quarterly grading special for members of the PCGS Collectors Club.

This special First Strike label will be available from April 1 through June 30, with a minimum submission of three coins.

Details can be found at www.pcgs.com/ccspecial.html.

As part of its Signature series, PCGS has contracted with San Luis Obispo, Calif., artist Cassie McFarland to autograph grading labels that will be included in encapsulations containing Baseball coins, Standish said.

McFarland’s baseball glove design was selected as the winner of the public design competition that identified the common design for the concave obverse on each of the three commemorative coin denominations.

Standish said other labels will likely be available associated with PCGS’s certification of Baseball coins. Continue to check www.pcgs.com for updates.