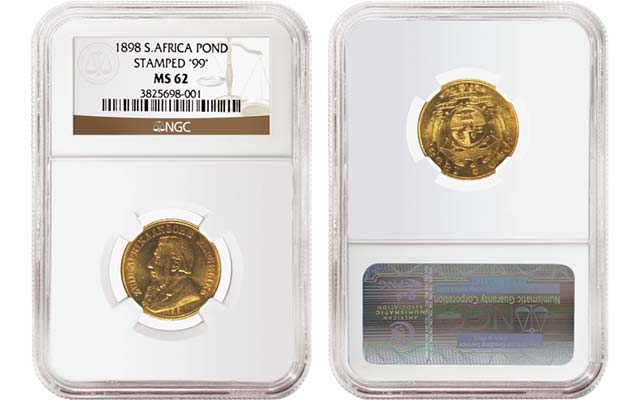 Numismatic Guaranty Corporation has graded a gold rarity from South Africa, the 1898 “99” stamped pond coin. It is one of just 20 examples that the firm has graded.

The following is from a press release from Numismatic Guaranty Corporation:

Numismatic Guaranty Corporation has graded another example of the rare 1898 South Africa pond with a “99” stamp.

Graded NGC Mint State 62, it is one of just 20 examples certified by NGC.

NGC’s office, which was opened in August 2013, provides a comprehensive solution for submitters throughout the European Union by handling customs clearance, shipping and insurance.

According to Pro Aurum Numismatik: “NGC did a phenomenal job from start to finish and we could not be more pleased with the result. Our customers increasingly insist on NGC certification because of the trust they have in NGC’s authentication and grading.”

“Our offices in Munich and Zurich have significantly simplified the submission process for collectors and dealers in Europe,” says Richard Stein, NGC Director of European Operations. “This has resulted in NGC seeing many more fantastic coins such as this 1898 ‘99’ Stamped Pond.”