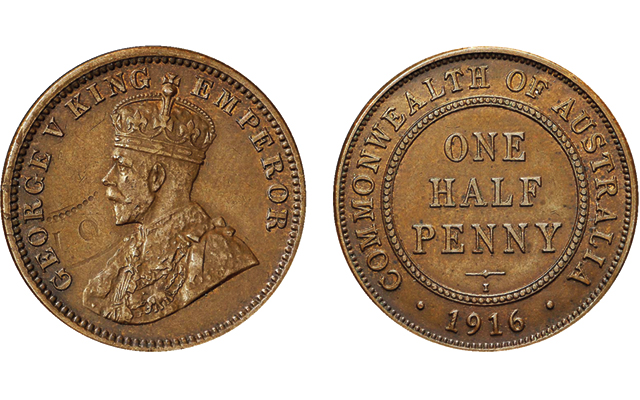 A rare 1916-I Australian halfpenny mule error, struck using an obverse die intended for a quarter-anna coin of India, is one of the many highlights in the Benchmark Collection. The collection was recently encapsulated, graded and authenticated by Numismatic Guaranty Corp. This coin grades NGC About Uncirculated Details. 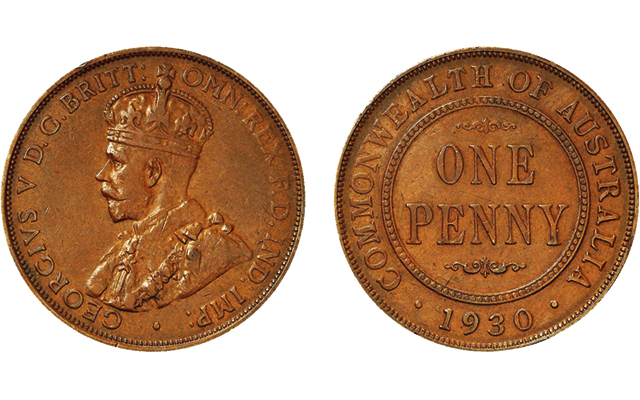 The rarest of the 1930 Australian pennies is the so-called London die variety, with three examples known. One is included in the Benchmark Collection. It is graded Extremely Fine 45.

A landmark collection of Australian coins has been graded by Numismatic Guaranty Corp.

The Benchmark Collection is the “most significant set of Australian pre-decimal coinage ever assembled,” according to NGC, which graded and encapsulated many of the coins in November and is just now publicizing their status in the firm’s registry sets.

Compiled by Mark Duff of Strand Coins in Sydney, Australia, over a period of 25 years, the Benchmark Collection includes a number of finest known examples, important rarities and previously undocumented varieties.

Among the collection’s highlights is the famous and enigmatic “Koschade specimen” of the 1916-I “mule” halfpenny, which is believed to be one of only 10 in existence today.

The mule coin was struck at the Calcutta Mint from an obverse die intended for India’s quarter anna coin, and a regular Australian halfpenny reverse (which shows an I Mint mark, as all halfpennies that year were struck in Calcutta).

The discovery of the mule (a coin struck by two dies not intended to be paired together) in 1965, nearly 50 years after it was minted, created a sensation in Australian numismatics.

The Koschade example in the Benchmark Collection is only the second piece to be certified by NGC. It is graded NGC About Uncirculated Details. The name comes from Darcy Koschade, who discovered the example after initial publicity about the first mule. The Koschade example was sold in a 1965 auction soon after it was discovered.

“The Benchmark Collection is unparalleled in its scope and boasts many outstanding Australian rarities,” says NGC Vice President Ken Krah. “We are very pleased that Mr. Duff chose NGC to certify this fantastic set.”

Duff said that his experiences with NGC grading and authenticating Australian coins owned by his clients led him to choose them to authenticate and grade the Benchmark Collection.

After his coins' certification by NGC, Duff created NGC Registry sets to showcase the Benchmark Collection. “The online NGC Registry allowed me to share these incredible coins with numismatists around the world,” Duff said.

The Benchmark Collection features the rare 1946 penny with the distinctive “K.G.” initials, a coin thought to be an experimental strike from the Melbourne Mint on dies that were prepared for but never sent to the Perth Mint. The lone NGC-certified example of this issue is graded NGC Mint State 64 red brown.

"These coins represent such an important period of Australian coinage history," said Jay Turner, NGC finalizer. "It was great to see that history in one complete set."

According to Max Spiegel, NGC’s vice president of sales and marketing, none of these coins is expected to be sold anytime soon.

“Although a large number of the coins were certified in November this has been a continuing project as Mr. Duff continues to add pieces to the [collection] and conduct additional research. We only just recently reached a point where we certified all of the pieces in this complete collection of Australian Pre-Decimal coins,” Spiegel said.

NGC has created an online gallery of images of coins in the Benchmark Collection.

To view the NGC Registry sets of the Benchmark Collection, visit www.ngccoin.com/gallery/benchmark.aspx.