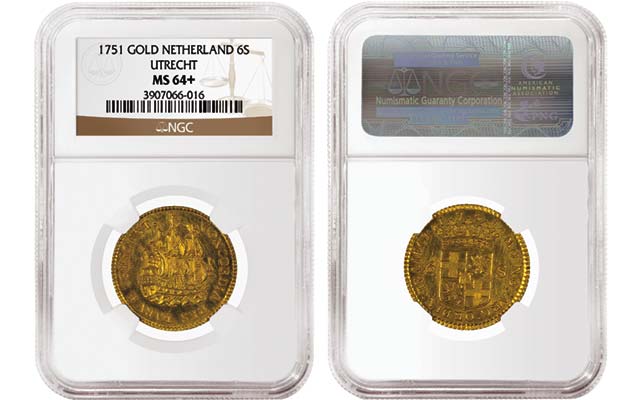 Grading and authentication service Numismatic Guaranty Corp., is now offering its "plus" designation for world coins of grades Extremely Fine-45 to Mint State-68.

Numismatic Guaranty Corporation® has expanded its Plus (+) Designation to world coins struck prior to 1970.

All eligible world coins submitted for grading on March 3, 2015, and later will be reviewed for +.

The Plus (+) Designation is assigned by NGC to coins at the high end of their numeric grade, approaching the quality requirements for the next grade. It differs from the NGC Star Designation, which is awarded to coins with exceptional eye appeal for their assigned grade.

The decision to evaluate world coins for + comes as collectors and dealers around the world have become increasingly attuned to the precision of the NGC coin grading scale.

“Collectors of world coins have become highly sensitive to the subtleties of each grade as a result of the rapid global acceptance of NGC’s certification,” says Mark Salzberg, chairman of NGC. “The expansion of the Plus Designation to world coins recognizes the incredible sophistication of these collectors.”

NGC graders have used indicators of premium quality internally for a number of years and in 2010 NGC launched + for most US coins. The success of this designation led NGC to expand + to world coins struck prior to 1970.

Coins with numeric grades from Extremely Fine-45 through Mint State-68 are automatically evaluated for + during the regular grading process.

NGC does not assign + to numeric grades below EF-45 or to MS-69 or MS-70 coins. There is no designation review service for +. All coins must be submitted for grading to be evaluated for +