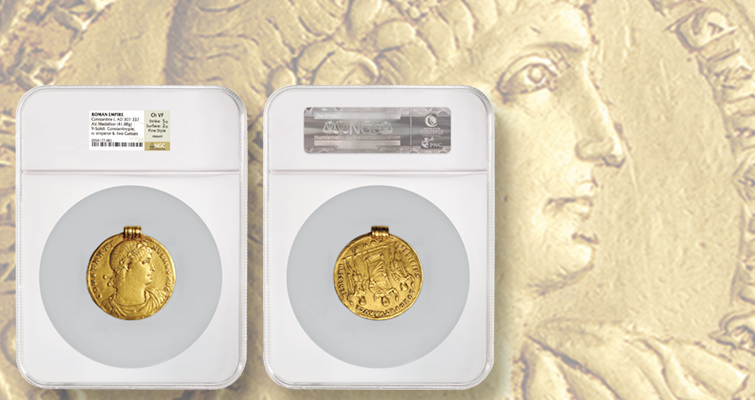 Numismatic Guaranty Corporation has graded an important large-sized gold medallion of the Roman emperor Constantine I (A.D. 307 to 337) that many believe to be unique.

One of the most famous Roman emperors, Constantine I is often called “the Great” for his many achievements during his three decades in power. He is particularly well known for being the first Christian emperor as well as for founding a new capital in Constantinople.

Some scholars believe that this medallion was struck in A.D. 330 to commemorate Constantinople's founding. It weighs an impressive 41.88 grams, which equates to a denomination of 9 solidi. Although issued as presentation pieces, these medallions were sized so that they could circulate in commerce. Only a small number would have been struck and each likely would have been personally given by Constantine I to important dignitaries.

NGC Ancients, a division of NGC dedicated to ancient coins, graded this piece Choice VF with a 5/5 Strike, 2/5 Surface and noted that its dies were engraved in Fine Style. Also noted was the circular mount at the top, which indicates that it had been used as an ornament. It was encapsulated in an NGC Oversize Holder because of its size — 48.8 millimeters from top to bottom.

“Roman medallions of this size are of the greatest rarity, with very few existing outside museum collections,” says David Vagi, Director of NGC Ancients. “We may be sure this piece was prized by its recipient, and perhaps by his descendants, for the gold suspension loop indicates it was used for ornamental purposes, presumably by a Roman nobleman or by a high-ranking member of an allied nation.”

Bonhams will feature this medallion in its Sept. 14 auction in Los Angeles. Although originally slated as a June offering, the medallion was moved to the later sale to allow its grading and encapsulation by NGC Ancients.

“Bonhams is delighted to be working with NGC again to promote and offer this exceptional rarity,” says Paul Song, Director of Coins and Banknotes for Bonhams. “During my 27-year-plus career, I have been fortunate enough to work on the Hunt Brothers and Athena Fund Collections, still two of the most valuable collections of ancient coins ever to be offered, and a medallion of 9 solidi such as this was in fact lacking from both. We are sure that this opportunity to acquire something of this high rarity will be a once-in-a-generation event."

The medallion will be on display at the Bonhams booth, No. 1617, at the American Numismatic Association World’s Fair of Money in Rosemont, Ill., Aug. 11 to 15.

For more information about the medallion and to bid, visit the auction firm's website.

Want to know about other ancient Roman coins? Coin World has you covered!

The Crispus conundrum: Heir to Constantine the Great dies mysteriously