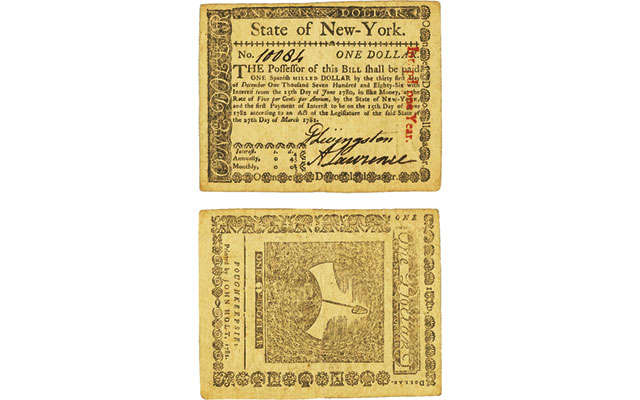 This $1 note issued by the State of New York, March 27, 1781, graded Extremely Fine 45 Premium Paper Quality, is part of the Eric P. Newman Collection. All images courtesy of Heritage Auctions. 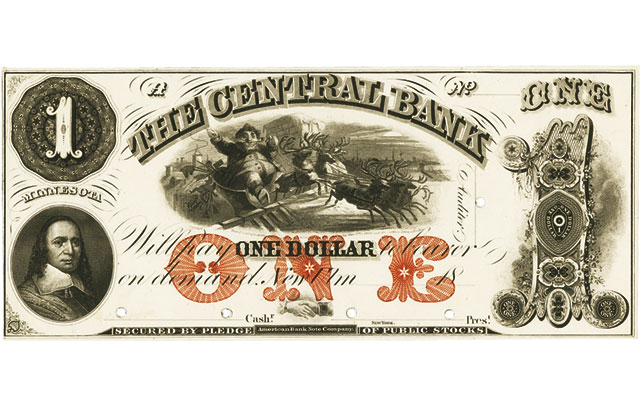 This uniface proof for a $1 note for the Central Bank of New Ulm (Minnesota), featuring a Santa Claus, sleigh and reindeers vignette, graded Very Choice New 64 PPQ, is from the Newman Collection. 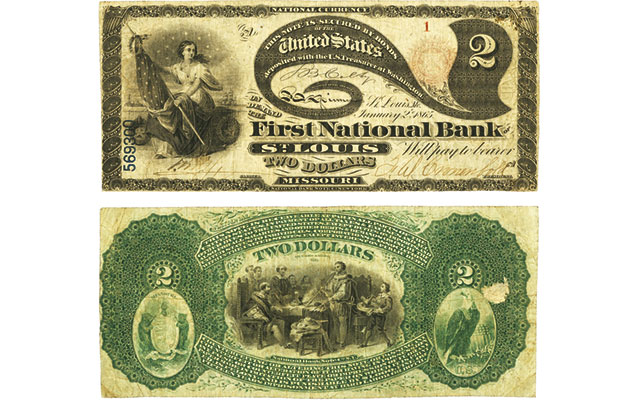 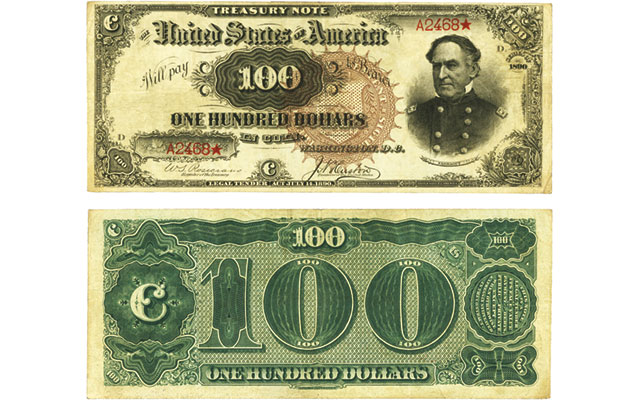 A Series 1890 Treasury note, graded Very Fine 30 PPQ, is an example of a “Watermelon” note; the large zeroes in the numeral 100 in the back design resemble watermelons.

Paper money from the Eric P. Newman Collection, dating from 18th century America and continuing through the 19th century era of obsolete notes and national bank notes and beyond, is offered in the Heritage U.S. Currency Signature Auction April 22 to 28.

The auction, the sixth sale of selections from the Newman Collection but the first to focus on paper money, will take place during the Central States Numismatic Society convention in Schaumburg, Ill.

Proceeds from the sale will be used to benefit not-for-profit institutions selected by the Eric P. Newman Numismatic Education Society, a Missouri not-for-profit corporation.

Newman began collecting 96 years ago. He began with coins, and then moved to paper money. His 104th birthday will be May 25, 2015.

All notes from the Newman Collection were graded by PCGS Currency.

Among the Newman notes to be offered are:

??A $1 note issued by the state of New York dated March 27, 1781. The note is graded Extremely Fine 45 Premium Paper Quality. The note is signed on the face by G. Livingston and Augustin Lawrence. The note features a Liberty Cap design on the back.

??A uniface proof for a $1 note for the Central Bank of New Ulm (Minnesota), featuring a Santa Claus, sleigh and reindeers vignette. The note is graded Very Choice New 64 PPQ.

??A $2 serial number 1 national bank note for the First National Bank of St. Louis graded Apparent Very Fine 20. The elaborately engraved note features the “Lazy 2” vignette showing the numeral 2 horizontally across the note, as if it was refusing to stand upright.

??A Series 1890 Treasury or coin note, graded Very Fine 30 PPQ, is an example of a “Watermelon” note. The back design is the origin of the nickname because the large zeroes in the numeral 100 resemble watermelons. The face of the note displays a portrait of Adm. David Glasgow Farragut.

In addition to being a collector, Newman is also a prolific, longtime writer and researcher.

Among the many books he’s written or co-written is his landmark reference guide The Early Paper Money of America, now in its fourth edition.

A few more of his writing accomplishments include The Fantastic 1804 Dollar, with Kenneth E. Bressett; The 1776 Continental Currency Coinage & Varieties of the Fugio Cent; and U.S. Coin Scales and Counterfeit Coin Detectors, with A. George Mallis.

In addition to his books and other writings he’s also provided for a 3,000-square-foot museum, which opened in 2006. The Newman Money Museum is housed within the Mildred Lane Kemper Art Museum on the campus of Washington University in St. Louis.

In 2003 Newman and his wife, Evelyn, donated $2 million to the university to build the Money Museum and for continuing expenses.

The museum houses exhibitions, some of them on a rotating basis, from Newman’s extensive collection.

The Eric P. Newman Numismatic Education Society owns the collection. A portion of Newman’s library is in the museum, and workspace is provided for researchers.

Prior coverage of Newman Collection auctions