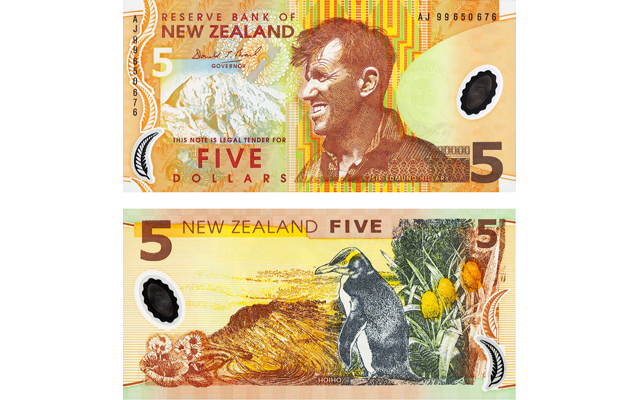 The designs on New Zealand bank notes, like this currently circulating $5 note depicting explorer Sir Edmund Hillary on the face and the rare hoiho or yellow eyed penguin on the back, will be modernized with new security features added. The redesigned notes are expected to be in circulation in late 2015.

More modern designs for New Zealand bank notes are expected to be made public in November 2014, according to an official with the New Zealand Reserve Bank.

“While other means of payment keep growing, cash remains in strong demand, and we need to keep it current and viable for its users,” said Reserve Bank Deputy Governor Geoff Bascand in a July 5 speech.

“Security features and the technology for designing and printing banknotes have advanced considerably since the current banknote series was first issued in the early 1990s. While counterfeiting rates in New Zealand are low compared to the rest of the world, we need to stay one step ahead of the game,” Bascand said.

The Canadian Bank Note Company, which prints passports for New Zealand, will design and print the next series of New Zealand’s notes.

The redesigned notes will be the same size and carry the same denominations as notes in the current series, and will continue to be made of polymer. The use of polymer for New Zealand notes began in 1999.

The new note designs will feature the same subjects—New Zealanders, flora and fauna—that are on current notes.

Once the new notes are printed and tested, they will be progressively released by denomination in the fourth quarter of 2015. The new notes will co-circulate with current notes for an unspecified period of time.