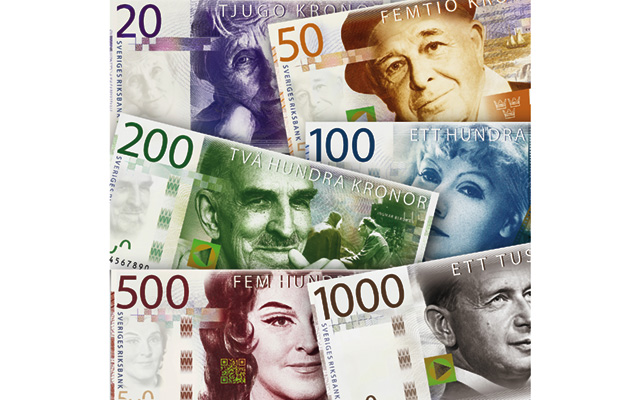 Image courtesy of the Riksbvank. 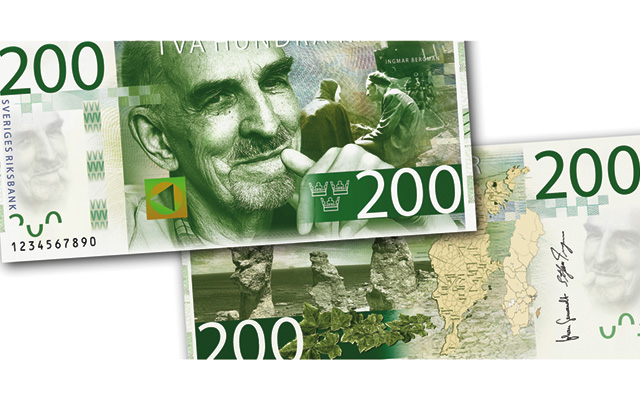 Portrait of Ingmar Bergman, director and producer of movies, stage plays and television drams, will be featured on the face of the new 200-krona notes. The back depicts scenes of Gotland, where Bergman lived. 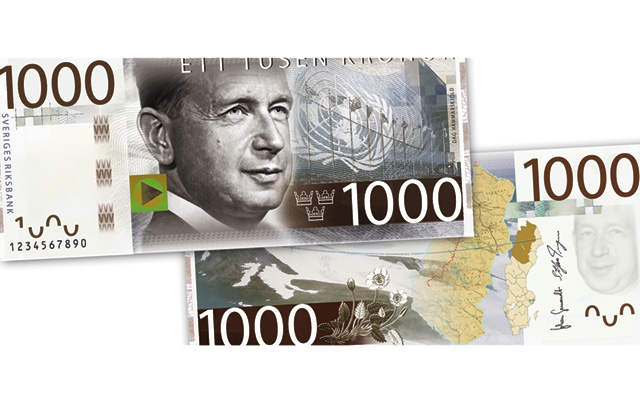 Diplomat Dag Hammarskjold will be featured on the face of the new 1,000-krona notes. The area of Lappland in Sweden will be the focus of designs for the back of these notes.

Image courtesy of the Riksbank.

In October 2015, Swedish citizens will begin finding the first four of six denominations of redesigned bank notes in circulation — including the new 200-krona denomination, according to a news release from Sweden’s central bank, Riksbank.

According to the bank, the new denomination will fill the gap between the 100- and the 500-krona notes, and will result in lower production of 100-krona notes.

Göran Österlund, a graphic designer and engraver, submitted the winning entries. His designs feature large portraits of 20th century Swedish cultural icons on the face of the notes. The back designs focus on nature and environment motifs linked to the person depicted on the face.

The 20-krona note’s face design has a portrait of the late children’s author Astrid Lindgren and a small vignette of her most famous character, Pippi Longstocking. The back design will depict familiar scenes from the province of Smaland, where the famous author grew up.

The late troubadour Evert Taube’s portrait will be on the face of the 50-krona note. A small depiction of a sailboat appears in the background on the face, as the themes of many of his songs were based on his sailing trips around the world.

Scenes from Bohuslan, on the western coast of Sweden, will be depicted on the back.

Ingmar Bergman, a director, writer and producer of film, stage and television productions, will be featured on the face of the 200-krona note. A small vignette depicting a scene during the filming of one of his best known movies, The Seventh Seal, also appears on the face.

The island of Faro on the northern edge of Gotland will be the focus of all images on the back of the 200-krona note.

Dag Hammarskjold, diplomat, author and economist, will be depicted on the face of the 1,000-krona notes. A small vignette of the United Nations building also appears with his portrait.

Hammarskjold served as the second UN secretary general from 1953 until his death in a plane crash at the age of 56 in 1961.

Scenes from Lappland will be the focus of the back design.

The two remaining redesigned denominations, the 100- and 500-krona notes, will be issued in October 2016.

A portrait of Greta Garbo, legendary star of silent films and early talking movies in the 1920s and 1930s, will be depicted on the face of the 100-krona note. Depictions of several small strips of motion picture film from her movies are part of the face design.

The back design will explore familiar Stockholm scenes.

Opera soprano Birgit Nilsson’s portrait will be on the face of the 500-krona notes. A vignette from one of her roles in Richard Wagner’s The Ring of the Nibelung operas appears also on the face.

Scenes from the farms of Skane will be used on the back.

For more information about the new designs, visit the Riksbank website at www.riksbank.se/en/