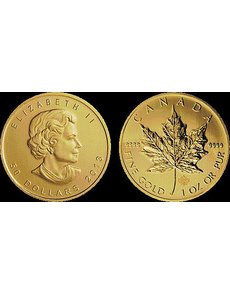 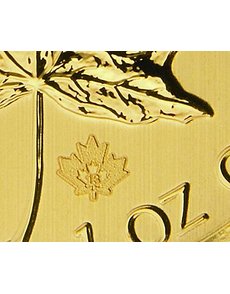 The device appears on the reverse of the 1-ounce .9999 fine gold $50 coin, the flagship of the RCM’s gold bullion program, but presently is not slated for use on fractional Maple Leaf gold coins.

Except for the addition of the new security device, the design of the 2013 1-ounce coin will remain the same, according to RCM officials.

The 2013 coins featuring the new security mark were to become available in early November 2012, according to the RCM’s Nov. 2 announcement.

The mark is derived from but does not exactly replicate the same ground-breaking security technology applied to Canada’s 2012 $1 and $2 circulation coins that were released in April. RCM officials do not call the new security device on the gold coins a “laser mark,” the terminology employed for the device on the new $1 and $2 coins.

This new visual security feature confirms the authenticity of all Maple Leaf 1-ounce gold bullion coins produced for 2013 and beyond.

No present security threat prompted the move, according to Alex Reeves, senior manager of communications for the RCM.

“Any coin, especially of high value, is exposed to the risk of counterfeiting,” he said. “Although there is no present issue with the [gold Maple Leaf] in this regard, we are being proactive in adding a robust and innovative security feature to a high value coin.”

The security mark consists of a textured maple leaf, micro-engraved with laser technology on the die, to appear on a small area of the reverse (Maple Leaf side) of the coin. In the center of the mark is the numeral “13,” visible only under magnification. The numbers will be changed annually to feature the last two digits of each corresponding year of issue.

Reeves said the mark is the latest extension of the RCM’s Digital Non-Reactive Activation technology. In the case of the gold Maple Leaf, the mark certifies that it was struck by a genuine Mint die of record but only identifies a “production run” of coins rather than individual coins.

That prompts questions of whether and when those in the coin hobby, particularly dealers, may soon be permitted to buy handheld “DNA” readers envisioned as a means to authenticate coins.

Reeves said, “It is also too early to discuss the availability of readers in the marketplace, but this is certainly a capability of the technology.”

Canada’s current Maple Leaf gold coins depict a Walter Ott image of a maple leaf on the reverse, with the Susanna Blunt effigy of Queen Elizabeth II on the obverse. ¦