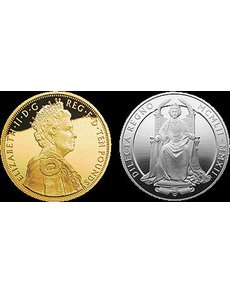 Britain’s Royal Mint is offering Proof 2012 5-ounce gold and silver coins commemorating Queen Elizabeth II’s Diamond Jubilee. The coins share common designs, including a new portrait of the queen. Shown are the obverse of the gold coin and reverse of the silver piece. 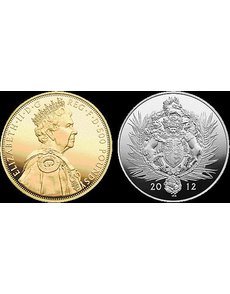 The Royal Mint offers Proof kilogram gold and silver coins commemorating the Diamond Jubilee. The two coins use the same obverse as used on the two 5-ounce coins but share a different reverse, the coat of arms found on the gates of Buckingham Palace. Shown are the obverse of the gold coin and reverse of the silver commemorative.

Broadley’s new portrait depicts the queen wearing her garter robes and a tiara given to her by Queen Mary, her paternal grandmother. Her name and the Latin inscription identifying her as queen, plus the denomination of the coin, encircle the portrait. The design has already been used on BU base metal and Proof silver and gold versions.

The reverses of the two 5-ounce coins depict an enthroned Elizabeth II, facing the viewer, with a Latin inscription that translates as “I reign beloved,” plus the dates of her reign in Roman numerals.

The reverses of the gold and silver kilogram coins depict the coat of arms found on the gates of Buckingham Palace and 2012.

The two kilo coins bear a higher relief than other British coins, according to the Royal Mint.

The kilo .999 fine gold coin is limited to a maximum mintage of 60 pieces and must be special ordered. A price for the coin is not given at the Royal Mint website.

For additional information or to order Diamond Jubilee coins, go to the Royal Mint website at www.royalmint.com/, or telephone the Royal Mint toll free at 866-519-7298 in the United States or at 866-924-0861 in Canada. ¦