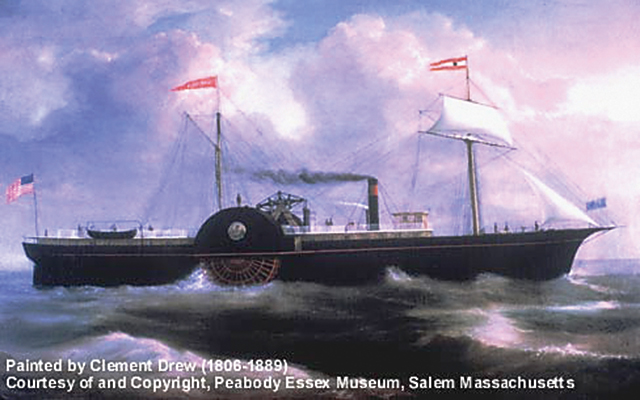 A contemporary painting depicts the SS Tennessee, later named the SS Republic. The vessel sank during an 1865 hurricane, causing significant loss of life. 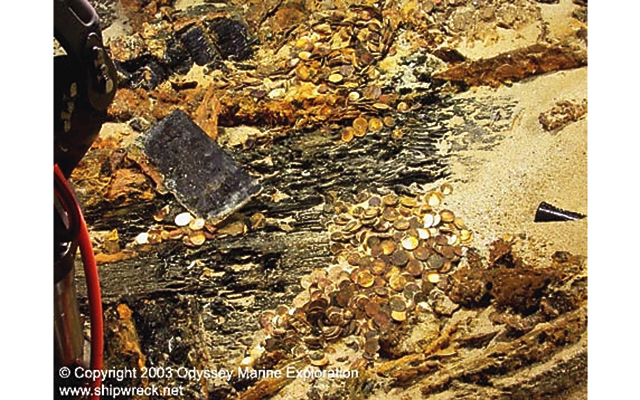 Odyssey Marine salvors located and began recovering gold and silver coins at an Atlantic shipwreck identified as the SS Republic. Shown is a pile of gold coins in one of four concentrations found at the site during an early expedition. 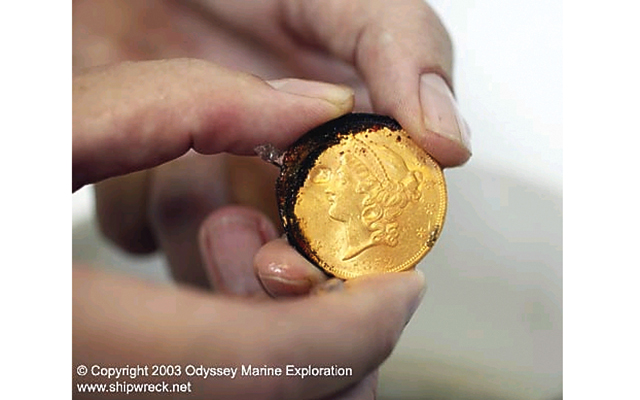 Image shows a Coronet gold double eagle with a circular swath of encrustations. Many of the coins recovered from the wreck were conserved before being offered in the marketplace.

Less than 10 years after the SS Central America was lost in 1857, another treasure-laden ship, the SS Republic, was sunk during by an Atlantic Ocean storm, in October 1865. A century and a half later, the ship was discovered and then salvaged by Odyssey Marine Exploration Inc., the same firm now responsible for carrying out new salvage operations on the SS Central America.

As reported in Coin World in an April 2005 issue, “The SS Republic was a paddlewheel steamer that sank during a hurricane in 1865 en route from New York to New Orleans with post-war supplies and currency. Odyssey discovered the wreck in August 2003, nearly 1,700 feet below the surface of the Atlantic and was awarded title and ownership to it and its cargo in March 2004.”

According to the Coin World article, “Soon after beginning archaeological excavation [in 2003], Odyssey’s Sediment Removal and Filtration (SeRF) system found a substantial number of gold coins. More than 51,000 coins with a wide variety of dates and Mint marks have been recovered, including gold $20 double eagles, gold $10 eagles, half dollars and quarter dollars.” Of the total, more than 47,000 pieces were the silver half dollars.

“The condition and diversity of the coins we have recovered ... have significantly exceeded our expectations,” Greg Stemm, Odyssey co-founder and director of operations, said in 2005.

Among the highlights of the finds was the finest known 1854-O Coronet double eagle, graded About Uncirculated 58 by Numismatic Guaranty Corp.

In addition, researchers identified 14 different die marriages used to make 1861-O Seated Liberty half dollars for three different governments — the United States, the state of Louisiana and the Confederate States of America — partly through the large number of these coins that were recovered from the SS Republic, Coin World reported in August 2006. According to the salvage firm, “This research was published in the Gobrecht Journal in November 2006 and for the first time ever has allowed 1861-O Seated Liberty half dollars to be certified by Numismatic Guaranty Corporation as being minted by each of the three governments operating in Louisiana in 1861.”