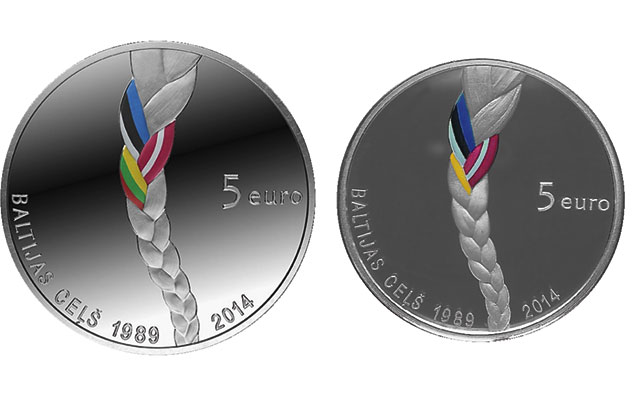 The reader who found the 2014 coin below, lacking two colors that were part of the intended design (left) is "lucky," according to a Bank of Latvia official.

Images courtesy of A. Sludin.

I bought a Proof 2014 Latvian Baltic Way commemorative silver €5 coin and it is missing some of the color that was supposed to be applied to represent the Lithuanian flag.

What has more likely happened with the coin during its colorizing in mint, that caused missing colors? Is there a classification for Proof coins with this type of error (not fully colored elements of coin)?

And are there any known examples of Proof coins with this type of error (not fully colored elements)? For example, a Canadian Proof coin with the national flag missing a color?

Coin World decided to go straight to the source, interviewing Maruta Brukle of the Bank of Latvia during the World Money Fair in Berlin that was held from Jan 30 to Feb. 1, to seek answers to the reader’s question.

Brukle said the coins were created by the Royal Dutch Mint for the Bank of Latvia, and that color was added via the pad printing process, common for world coin issues today.

In some instances the color application does not fully engage.

Brukle said that cashiers selling the coins always look for such errors, and if they are discovered the coin would not be sold, meaning the collector “probably has a unique coin. The collector is really lucky. There are no other coins missing color to our knowledge.”

Proliferation of colorful world coins in the last two decades would suggest that this is not the first time such an error has occurred, but Coin World cannot recall any other instance of a mint-colored collector coin lacking some or all of the color. That is not to say that it hasn’t happened, of course.

The challenge with a coin missing a color or colors is detecting the absence. A colorized Canadian flag lacking white might more readily be spotted, as that symbol is widely known. Fewer people might recognize that stripes representing a Lithuanian flag are missing colors on a coin of Latvia.

We know of no official cataloging designation to describe this type of error, other than simply classifying it as “missing color.”