The White Mountain National Forest quarter dollar was launched into circulation on Feb. 21, near Mount Chocorua, the mountain depicted on the coin. 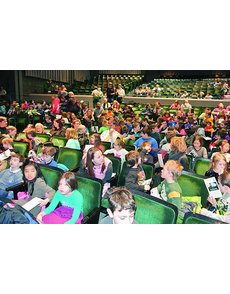 Hundreds of elementary schoolchildren from the Plymouth and Campton district were on hand with their teachers to watch the ceremony and to each receive a sparkling new White Mountain National Forest quarter dollar. 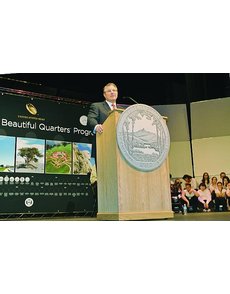 Acting U.S. Mint Director Richard Peterson stands at the podium, delivering a wide-ranging appreciation of the new quarter, enhanced by relating personal experiences of when he and his family lived in and enjoyed New Hampshire. 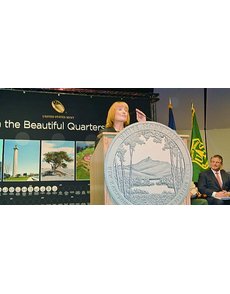 Gov. Maggie Hassan welcomes a full auditorium dominated by children, but with many adults in attendance, including members of the Nashua Coin Club and other numismatists. 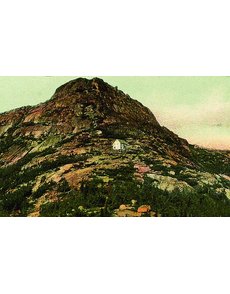 Detail of a 1906 post card showing the Peak House near the rocky top of Mount Chocorua. This structure accommodated overnight guests until it was blown down in a windstorm in 1917. 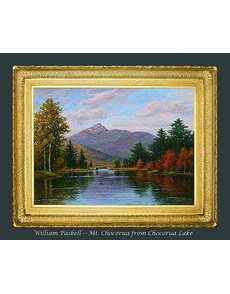 Mount Chocorua from Chocorua Lake, oil on canvas by American artist William Paskell circa 1900. (The painting is from the author’s collection.)

The Feb. 21 launch ceremony for New Hampshire’s 2013 quarter dollar was held at a site beloved by the state’s inhabitants — White Mountain National Forest.

The launch ceremony was held at Plymouth State University in Plymouth, N.H., in the heart of the White Mountains, eight miles from Campton, a small town where the White Mountain National Forest headquarters is located. The venue was Hanaway Hall.

As is Mint policy, the staff of the national forest was called upon to make arrangements with local and regional people to attend, including schoolchildren. It was more of a White Mountain National Forest event than a U.S. Mint event. It, like other launches, was truly “down home.”

Mint staffers conducted a coin forum in Campton the previous evening, with general discussions. Eighteen people were on hand. I was not able to attend.

I left Wolfeboro, N.H., at 8:45 on Thursday morning, Feb. 21, taking David Owen, our town manager, along for the ride. In about an hour we arrived at the university and went to Hanaway Hall, where most of the seats were already filled — with hundreds of eager elementary schoolchildren from the area.

The Mint had reserved seats for us in the front row, and we sat with David Sundman, who was on hand to represent Littleton Coin Co. Dave Owen was glad to meet Dave Sundman (lots of Daves here!) as he has been a Littleton client for many years.

Members of the Nashua (N.H.) Coin Club were also in attendance — the “numismatic delegation,” so to speak.

Everyone was set to witness a historic event. Children are, of course, the building blocks of the future and Mint ceremonies typically include them. However, unlike the 2000 State quarter launch in New Hampshire in which the number of children participating was rather modest, now they nearly filled an entire auditorium.

On the stage at one side was the Plymouth Elementary School Band, which began the program with a selection of music. On the other side of the stage were the fourth graders from the Campton Elementary School, who led the audience in the Pledge of Allegiance, followed by the National Anthem.

Shortly after 10:30 am, Bill Dauer of the National Forest Service, went to the podium and introduced guests and gave opening remarks. It was evident from the outset that the White Mountain National Forest is more than just a tourist attraction to be visited on occasion. Indeed, it is a part of New Hampshire life. I know that, of course, having lived in New Hampshire for many years.

The White Mountain Range, dominated by Mount Washington at 6,288 feet, which has an observatory at the top and prides itself as having the worst weather on Earth, includes several dozen peaks of various heights. In and among the valleys are many different towns.

Accordingly, the White Mountains are just about everywhere in the North Country, so to speak.

Selected for depiction by designer Phebe Hemphill was Mount Chocorua, located in the town of Tamworth, rising above Lake Chocorua in a picturesque setting. With its rocky outcrop on top and distinct appearance, the mountain has been a favorite for artists, photographers and hikers for a long time. It is well memorialized in White Mountain art — a genre somewhat related to the Hudson River School — nice depictions of landscapes with luminescent aspects. In the early 20th century, a two-story Peak House hotel rested on the slopes of Mount Chocorua, but it blew down in a terrific windstorm in 1917 and was never replaced.

Hemphill and the other artists who submitted designs were not given a direction but were shown many examples of White Mountain art from which they could select favorites. Everyone agrees that Chocorua was a great choice.

Then came remarks from representatives of Sens. Jeanne Shaheen, D-N.H., and Kelly Ayotte, R-N.H., after which Tom Wagner, White Mountain National Forest supervisor, acquainted the audience with the National Forest.

Richard Peterson at the podium

Acting Mint Director Richard Peterson came to the podium next. In each of the State quarter dollar launches as well as the America the Beautiful quarter launches, a top official of the Mint is featured. The New Hampshire quarter dollar was a remarkable exception to the frequently canned comments by Mint officials at coin launch events. It turns out that Peterson, retired Navy officer, used to be with the Portsmouth Naval Base in New Hampshire, a headquarters for submarines. He and his family lived in the Granite State, enjoyed the surroundings from the seacoast to the White Mountains, and still reminisce about their experiences. His remarks were more than just general — he even named his favorite restaurants.

He then shifted to numismatics, telling of President Theodore Roosevelt’s desire in 1904 to enlist America’s most accomplished sculptor and engraver, Augustus Saint-Gaudens, to redesign the entire spectrum of American coinage from the cent to the $20 double eagle. The sculptor accepted the challenge and set about work in his studio in Cornish, N.H.

“Who was that sculptor?” Peterson asked the audience. “Coin collectors are not allowed to answer!”

Someone in the distance said, “Saint-Gaudens.” Peterson continued with his reminiscences.

Next in the program was Maggie Hassan, newly installed governor of New Hampshire, who told of her love of New Hampshire and delineated some of the policies she hoped to implement during her governorship. This part could have been a “political” speech given anywhere. Then she transitioned to the subject at hand, the White Mountains, and told of her experiences and love for them.

The ceremony then concluded, after which Rep. Kuster, Gov. Hassan and Acting Mint Director Peterson went into the audience, each carrying a sack of individual quarters to hand out into hundreds of schoolchildren’s outstretched hands. A happier scene could not be imagined!

Each coin had a P Mint mark. Each one that I saw could be called a gem in condition — hardly any contact marks. The coins were as brilliant and beautiful as the day they were struck.

As noon approached, David Owen and I headed toward the exit, stopping in the lobby at tables arranged for by the Meredith Village Savings Bank in cooperation with the Treasury Department, where $10 bank-wrapped rolls of the new quarter dollars were available — a minimum of one roll and a maximum of 10 rolls per person. Individual coins were not offered. I bought five rolls of quarters, and gave most of them to Owen and asked him to give them out to the Wolfeboro town employees (of which there are 82).

Nearby to the distribution of quarters, Littleton Coin Co., whose headquarters is less than an hour’s drive to the north, had a display set up, and gave away to all the children who wanted them specially packaged quarters plus album-boards to collect the America the Beautiful quarters. The exhibit was thronged. ¦