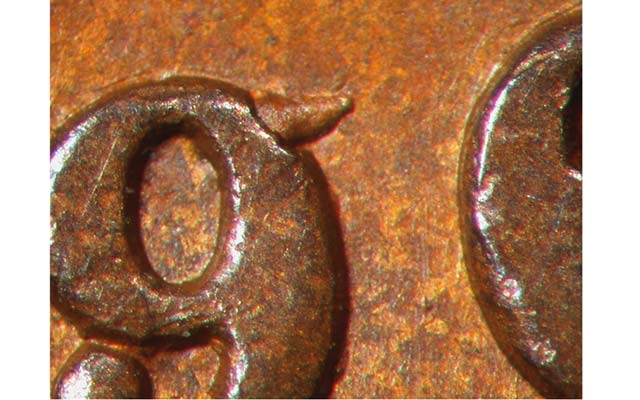 Bold, horn-shaped die chip provides the supportive evidence for this 1896 Indian Head cent to be nicknamed the Flying 9 variety. 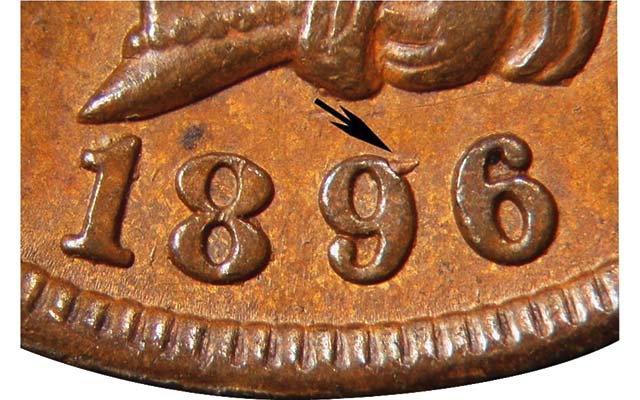 Arrow points to evidence of die chip protruding from the top right of the digit 9 in the date of the 1896 Indian Head, Flying 9 cent discovered by collector Douglas Hill. 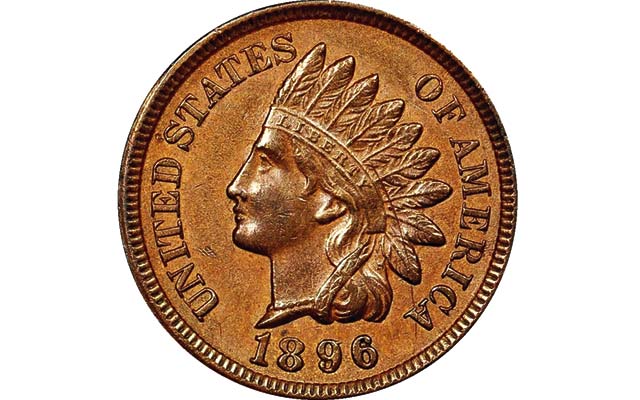 Collector Douglas Hill discovered a new example of 1896 Indian Head cent some have dubbed the "Flying 9" variety because of the horn-shaped raised metal protruding from the top right of the 9 in the date.

Experts, however, have reached no broad agreement on what caused the anomaly.

"I think that there is a possibility that during the date punching operation a sliver of 'date punch steel' separated from the main body of the 9 in the gang punch and got driven into the 'die steel' next to the 9, resulting in the wing-like depression in the die steel that left the raised wing-like image on the coin," DeLorey said via email June 2. "This theory is based upon the concave void in the 9 adjacent to the area in question.

"The sliver of date punch steel might have been cracked away from, but still attached to, the body of the 9 before the gang punch came in contact with the die steel, and either fallen partly under the 9 before contact or peeled away from the 9 as the 9 sank into the die steel and then spread outwards," DeLorey surmised.

Snow's website describes the coin thusly, in part: "It has a bold horn-shaped die chip off the 9. ... The die chip is believed to have been part of a broken piece on the digit punch that got impressed into the die. A unique and unusual variety."

Bill Fivaz, another noted die variety expert, disagrees with DeLorey's and Snow's assessment "as it has what I refer to as 'character.' That is, it looks like something (in this case, the flag of a '5'), and has a definite form, not an irregular appearance as would probably be the case in the other theory. ... Having said that, I do not have a thought from whence it came."

Nonetheless, Fivaz believes the coin an important find. He is co-author with J.T. Stanton of The Cherrypickers' Guide to Rare Die Varieties, and plans to include the new listing in the book's latest edition due for a September release.

Hill says he discovered the new variety in March while searching through a dealer's coin shop inventory in Jacksonville, Fla. Hill said when he located the new variety, he originally believed the coin to be a 9 over 5 overdate because of the resemblance of the die chip to part of a 5.

Hill's coin is available for sale on Snow's website with an asking price of $1,000. The coin is offered as About Uncirculated 58, but has not been graded by a third-party grading service.