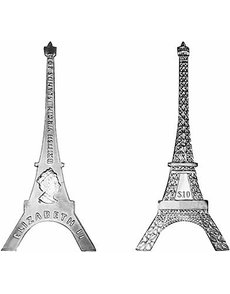 New coins from the British Virgin Islands celebrate the 125th anniversary of the completion of the Eiffel Tower in Paris. The .999 fine silver example is shown here. 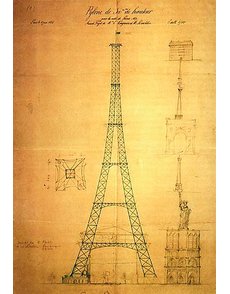 The blueprint by engineer Maurice Koechlin was apparently the first drawing of the Eiffel Tower.

Queen Elizabeth II can now be found on the Eiffel Tower.

Not the Paris landmark, but coins from the British Virgin Islands marking the 125th anniversary of the Tower’s erection in 1889.

The Pobjoy Mint produced the coins in the shape of the tower’s outline, a task that proved to be a technological challenge, according to Pobjoy Mint’s Geraldine Herneman.

“To start with, instead of the single process used to manufacture dies for normal round coins, there are three different processes involved in producing the dies for a more complicated shape. Secondly, unlike a round coin, this shaped coin comes to a point in various places, which causes stress on collars during striking which means that the collars are very susceptible to cracking and breaking at these stress points. Finally, because there is no rim on the coin, when struck the shape can cause a flash [excess metal] on the coin which also has to be overcome.”

Herneman called it “a difficult coin to produce but a superb tribute to the original.”

The Eiffel Tower is an iron lattice tower located in Paris, and is named for engineer Gustave Eiffel. It was erected in 1889 as the entrance to the Exposition Universelle, a world’s fair.

The tower was the tallest man-made structure in the world until 1930 and stands 1,063 feet (324 meters) tall. It has become one of the most recognized structures in the world.

The obverse of the coin shows Queen Elizabeth II, while the reverse shows the girders of the tower and the denomination.

Two versions are available, an Uncirculated nickel dollar and a Prooflike .999 fine silver $10 coin with an antique finish.

Both coins measure 80.6 millimeters tall and, at the widest point, 37.4 millimeters.

Coins won’t be available for delivery until mid-March, but orders are being accepted now. The nickel coin is priced at $35 and the silver coin at $199.

For more information or to order the coins, visit the website www.pobjoy.com or telephone the Pobjoy Mint at 877-476-2569. ¦