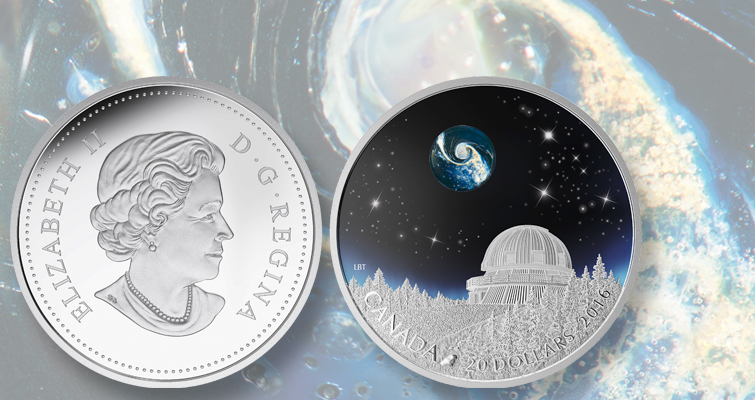 Canada has begun a three-coin Star Gazing series by showcasing the Universe. The coin employs color, glow paint and a piece of borosilicate fine-art colored glass to provide the celestial design.

One of the Royal Canadian Mint’s newest collector coins is the first to combine color, glow paint and borosilicate fine-art colored glass.

Each of the Proof 2015 The Universe .9999 fine silver $20 coins, released July 7, features a unique glass piece crafted with a swirl of silver dust to create an image of the universe that is one-of-a-kind. Variation in the swirl of the silver dust makes each coin different.

A globule of borosilicate glass shines with an image of the universe. The round, crystal-clear qualities of the glass are similar to peering through a telescope lens, and its luminescence further enhances the viewer’s experience of gazing into the galaxy — an effect that also shines from some of the stars (enhanced by glow paint).

The Susanna Blunt effigy of Queen Elizabeth II appears on the obverse of the 2016 coin.

The Universe coin is the first in a three-coin Star Gazing series. The other two themes have not yet been announced.

To order the coin, or for more details, visit the RCM website.

Like Canadian coins? Check out these Coin World stories!