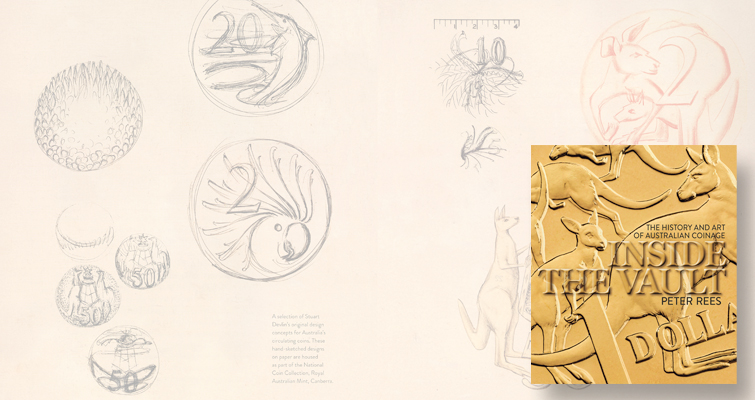 A new book explores the history and art of Australian coinage.

Inside the Vault: The History and Art of Australian Coinage by Peter Rees was released in mid-February and is currently available from the Royal Australian Mint.

The 192-page book “uncovers the fascinating story of the nation’s currency.” According to publisher NewSouth, “Bestselling author Peter Rees traces significant events — the Rum Rebellion, the gold rushes of the 19th century, the opening of the Royal Australian Mint, the introduction of decimal currency in 1966 — and their effect on Australia’s coinage.”

The heavily illustrated book includes never-before-seen design sketches and images of key Australian coins along with images of important events and people in the history of Australian coinage.

The new book traces the history of the nation, from the 1788 First Fleet landing to present day, including famous issues like the Holey dollar and dump and the 1930 penny. The book reports on current technology like domed coinage, triangular coins, circulating coins sporting color and more. Closing the book are eight pages offering historical notes, a bibliography, image credits and index.

The book retails for $59.99 Australian and may currently be purchased from the Royal Australian Mint, with the price in U.S. dollars to be determined at the time of purchase.

The publisher said the book will not become available in North America until June 1.