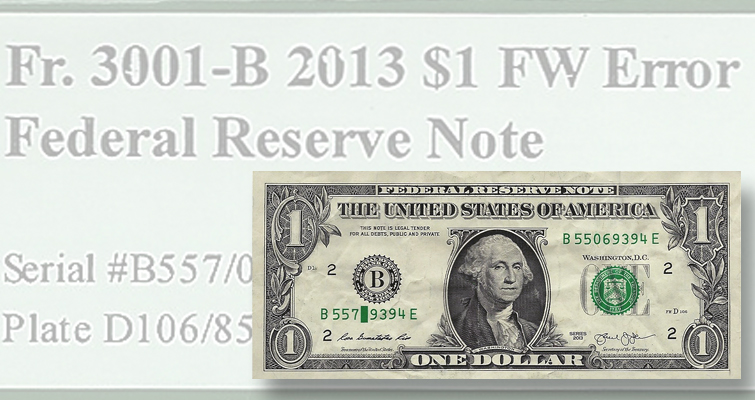 A new type of mismatched serial number error has been found on a Series 2013 $1 note printed on a 50-subject sheet.

A new type of serial number error has been reported.

Researcher and author Frederick J. Bart of ExecutiveCurrency.com in Roseville, Michigan, reports the discovery of a Large Examining Printing Equipment press setup error on a Series 2013 $1 Federal Reserve note, printed at the Bureau of Engraving and Printing’s Fort Worth, Texas, facility. The LEPE press was first used for the Series 2013 notes and can accept both 32- and 50-subject sheets. All Series 2013 $1 notes are printed on sheets of 50. Additional examples of the error may be in circulation from the same D1 sheet position.

On the eve of the American Numismatic Association World’s Fair of Money in Denver, Bart met with a Coors Field employee. The employee caught the error while counting cash.

Bart calls it “the most exciting discovery in the realm of error notes thus far this decade.” He classifies this as a mismatch in the serial number. Although the third digits are out of sync, it is hardly a typical mismatch, as a solid green rectangle replaces a digit in the fourth position. This odd occurrence, Bart says, shows that transitions in BEP equipment can produce unique results. The note has been authenticated and certified by PCGS-Currency.

The Large Examining Printing Equip­ment is designed specially for the BEP to consolidate four currency production processes. The BEP says that what makes the work of the 144-foot-long machine so notable is that “it performs multiple inspections and verifications using a total of 20 cameras as it inspects, prints, verifies and packages currency, all at the rate of approximately 9,000 sheets per hour.” 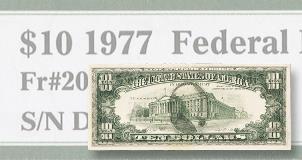 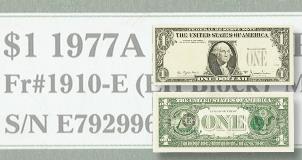 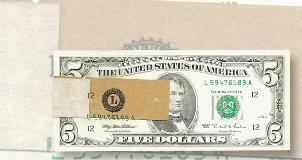