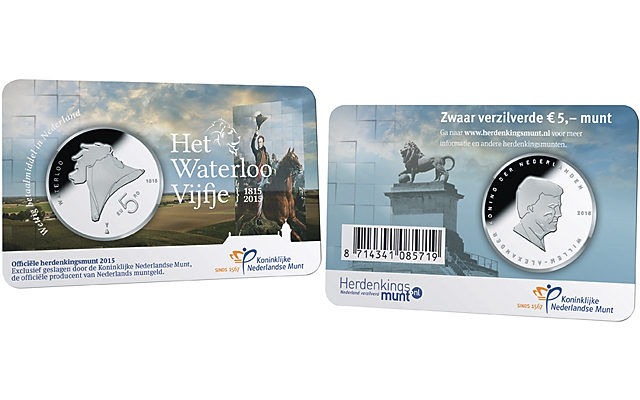 The Uncirculated silver-plated copper version of the €5 coin from the Netherlands marking the Battle of Waterloo bicentennial is available in a colorful coin card. 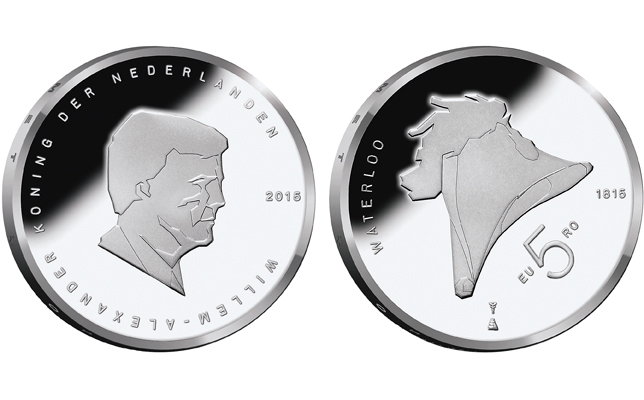 The Netherlands has issued a Proof silver €5 coin to mark the Battle of Waterloo bicentennial. 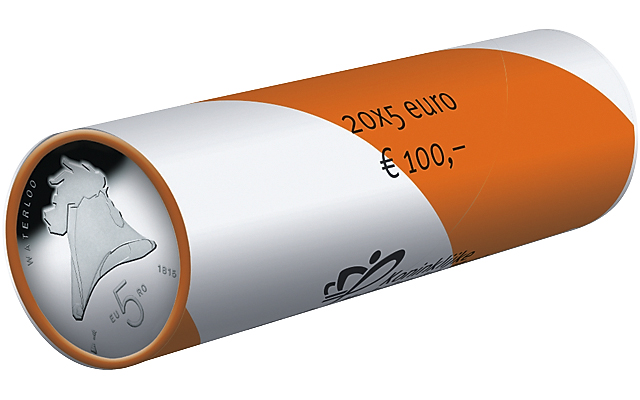 A limited number of Uncirculated examples of the silver-plated copper €5 coin from Netherlands marking the Battle of Waterloo bicentennial are available in rolls of 20 coins. 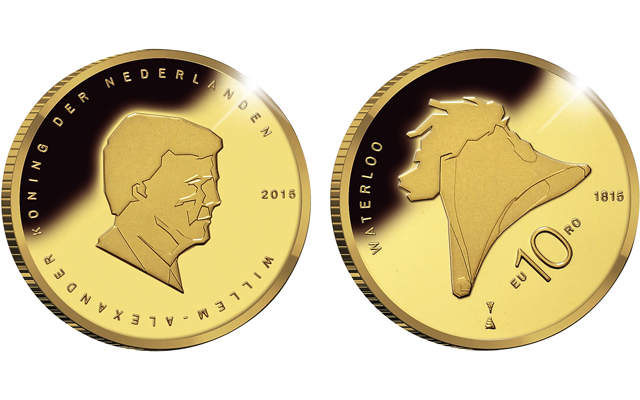 The Netherlands is marking the Battle of Waterloo bicentennial on a suite of commemorative coins, including this Proof gold €10.

The Battle of Waterloo, fought on June 18, 1815, near Waterloo in what is now Belgium, is considered by many to be the most famous battle in history.

The battle was fought in what was then part of the United Kingdom of the Netherlands. The modern state of Netherlands has issued a series of 2015 coins commemorating the great battle.

One military hero of the battle was Prince of Orange (who would go on to become the Dutch King Willem II). The reverse design is based on his headdress, a bicorn, the two-cornered hat that was typical in military attire of the period.

The coins were designed by painter Marjolein Rothman.

The Uncirculated coin weighs 10.5 grams, measures 29 millimeters in diameter and has a mintage of 250,000 pieces. In total, 15,000 are available in a descriptive coin card, with others issued at face value into circulation through PostNL post offices and Primera (a post office type store).

The Proof silver coin weighs 15.5 grams, measures 33 millimeters in diameter and has a mintage limit of 12,500 pieces.

The Proof gold coin weighs 6.72 grams, measures 22.5 millimeters in diameter and has a mintage limit of 1,500 pieces.

Distributor Coin & Currency Institute offers the silver-plated copper coin for $19.50, the silver coin for $52.75 and the gold coin for $497. Add $5.75 per order for shipping and handling

Sales of the coins began May 19, but their release is set for June 15.