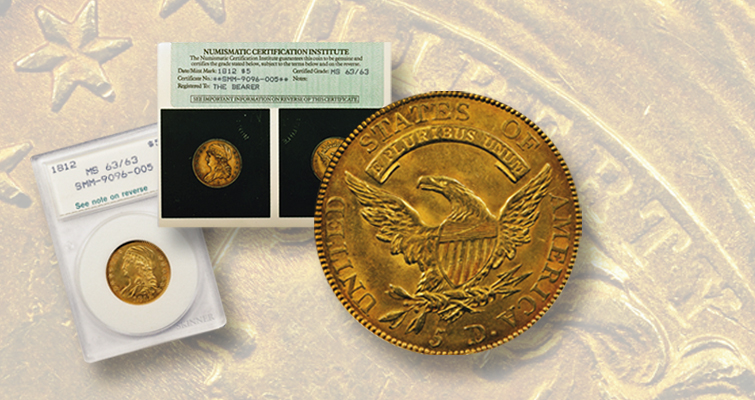 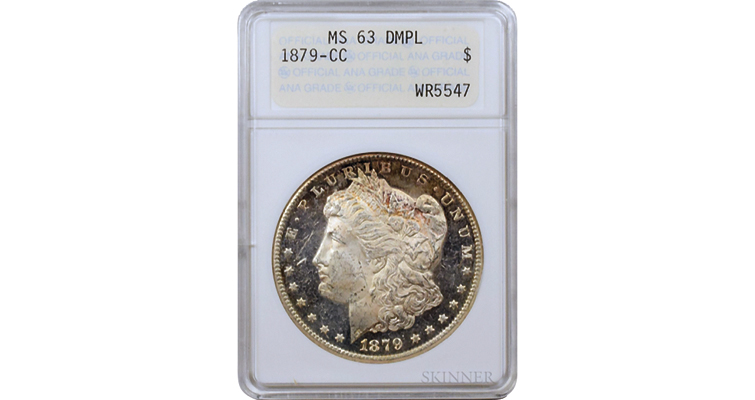 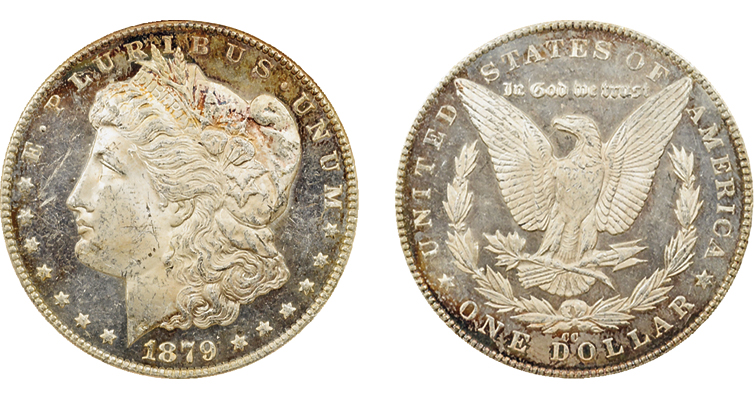 The population of 1879-CC Morgan dollars with deep mirror prooflike surfaces is estimated to be very small with no more than 125 examples extant in all grades.

A collection of coins housed in holders from Numismatic Certification Institute, which was active in the 1980s and has long-since ended operations, led bidding at Skinner Auctioneers’ recent coins and currency auction that closed Sept. 21.

The auction’s results totaled nearly $250,000, led by an 1812 Capped Draped Bust gold $5 half eagle graded Mint State 63/63 by NCI that sold for $20,000 against an estimate of $18,000 to $20,000. It was housed in its original NCI slab with an accompanying NCI photo certificate that gave a separate grade for the obverse and reverse. Skinner called it a “nice original coin.”

PCGS CoinFacts explains, “Most 1812 Half Eagles exhibit a strong strike, usually with all of the obverse stars defined nicely.” The offered coin does show nice detailing, though the site notes, “If there is any weakness, it is sometimes on the ribbon on the reverse, where the RI of PLURIBUS might be indistinct.”

The date marks the final year of the Capped Draped Bust type, which was first struck in 1807. Population reports show that it is the most common of the dates of the short-lived type in Mint State grades, though still scarce.

Market grading has evolved since the piece was certified by NCI, but bidders seemed to support the stated grade, with it selling at an amount similar to what other examples in MS-63 have realized at auction.

Another coin that crossed the podium in an older holder was an 1879-CC Morgan dollar graded MS-63 Deep Mirror Prooflike by ANACS that sold above its high estimate of $9,500, realizing $13,750.

An online resource put together by collector Robert Paul helps date this slab to between February 1989 and June 1990. He writes, “This holder is the 1st generation slab style holder issued by the [American Numismatic Association] prior to being purchased by Amos Publishing and being re-labeled ANACS.” Paul calls it the “ANACS Slab Gen 1 (Type 11) and reports that ANACS slabs of this area are uncommon.

The 1879-CC Morgan dollar is extremely popular as a semi-key issue in the series from the famed Carson City Mint. The issue offers two types of Mint marks: the clear CC and the “Capped CC,” which is the result of a rusted die. Many collectors prefer the clear Mint mark examples and, as Rusty Goe has observed in The Confident Carson City Collector, Volume 2, “the answers for this are varied and, frankly, a bit irrational at times.”

The price realized was consistent with comparably graded coins by Professional Coin Grading Service and Numismatic Guaranty Corp. As Heritage has observed, “PCGS has graded nearly 10,000 1879-CC dollars, but less than 1% of those submissions have been awarded a DMPL designation.” Goe suggests that the population of 1879-CC Morgan dollars with deep mirror prooflike surfaces is very small with no more than 125 examples extant in all grades. 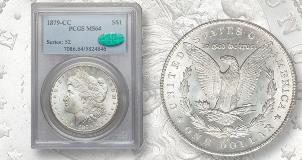 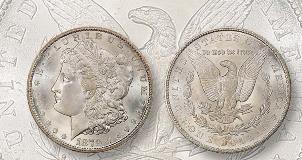