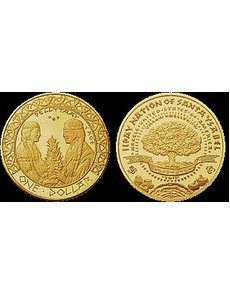 A new collector set of coins, from the Santa Ysabel Indians in northern San Diego County, celebrates the tribe’s heritage.

A new collector set features coins that are denominated in U.S. currency and read “United States of America,” but they are not official American coins.

A financially troubled Native American tribe in San Diego County has issued the series of seven coins through a private European distributor.

Native American tribes have the sovereign right to issue their own coinage, according to Numiscom, and in recent years perhaps a dozen tribes have issued noncirculating legal tender through or with the assistance of businesses in the coin hobby.

The designs depict images representing the tribe’s heritage on the obverse and the tribal symbol, an oak tree, on the reverse. Obverse images include a medicine man (1 cent), basketry (5 cents), fire (10 cents), ancestors (25 cents), crafts (50 cents), sage ($1) and a rabbit with an elderly women ($5). The tribal names for these items appear with their English identifications.

According to Numiscom’s Nina Kaminski, a sales manager with the firm, the coin sets are being issued “to bring the culture and history of Indian tribes to a greater range of people worldwide.”

Each design was approved by the chief and the tribe, Kaminski said when the coins were first released.

Kaminski, in announcing the series to Coin World, acknowledged that the firm had heard some criticism of native tribes for selling their name, but said that “this is not the case with the Los Coyotes and Santa Ysabel! The Indians are very keen to show their heritage, they want to be proud of their coinage and they want it to be real. So these are [not] fantasy coins where a company just put a nice motif under a bought name. These are really the coins of the Indian tribes with their motifs, their history and their culture.”

The 1-cent coin is composed of copper and the 5-, 10-, 25- and 50-cent coins are all made from copper-nickel. The $1 coin is struck in a copper-zinc-manganese-nickel alloy and, according to Anderson, the ringed-bimetallic $5 coin has an aluminum-bronze center and a copper-nickel ring.

The coins have varying weights and diameters but none match specifications for equivalently denominated U.S. coinage.

The timing of the launch nearly coincided with the tribe’s July 3 filing seeking bankruptcy protection for the casino it began operating nearly five years ago on its remote reservation in northern San Diego County.

Kaminski said the coins do not have a mintage limit and each of the about 300 members of the tribe received a set of the coins, which were struck by Osborne Coinage, a private mint in Ohio.