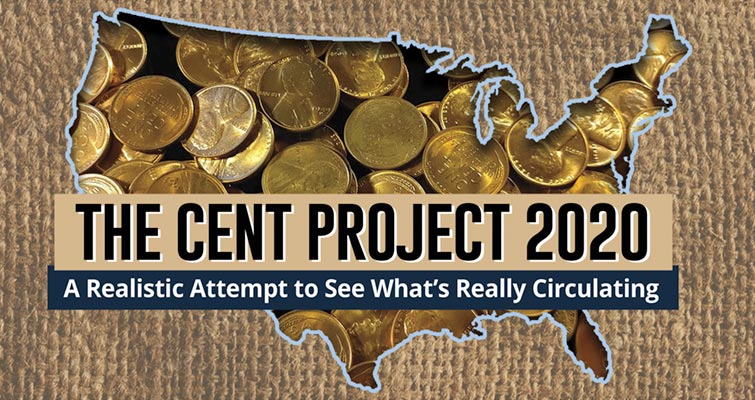 An initiative to record the surviving population of Lincoln, Memorial cents in circulation, will require up to 44,000 coin sorters throughout the country.

Image courtesy of Charles Daughtrey and The Cent Project.

Lincoln cent specialist and dealer Charles Daughtrey is looking for a few good men — and women — to make “cents” of things.

Make that a few tens of thousands of people.

Daughtrey figures it will take 44,000 people scattered across the United States to cumulatively sort through 220 million cents, approximately one percent of all Lincoln Memorial cents in circulation, in a task he has dubbed The Cent Project.

It’s a project whose idea is 13 years old, but that he can now pursue thanks to social media, and stay-at-home time.

Daughtrey on May 6 created the Facebook group for the project (www.facebook.com/groups/537254803879873) to solicit participants and discuss methodology.

“While the project idea was great and would probably have worked, at that time (before social media) getting a sample of volunteers large enough to make the group effort ‘legitimate’ just wasn’t possible,” Daughtrey said in the group.

The task is relatively easy, when broken down to the individual level.

Daughtrey is asking individuals to each sort through 10,000 cents (two boxes, or 200 rolls), and is attempting to coordinate enough participants around the country, linked by geography.

Daughtrey looked at the most-populous 380 counties, and created a “schedule” based on congressional seat allocation.

“The point is to disperse the searching by population density, not to exclude anyone,”he said.

However, using South Dakota as an example, Daughtrey said, “I wouldn’t want one person in Wall trying to cover the entire state. It’s not fair to that one person, and it’s not really representative of a population spread between Rapid City, Pierre, and Sioux Falls, where over 80 percent of the population of the state lives.”

On the other hand, though, a state like California would require as many as 4,565 sorters.

Participants would share their results with regional coordinators, who would collate the information and enter it into a special website.

To ensure greater accuracy, participants may be asked to hold the coins they have assessed until the reporting period is complete, which Daughtrey hopes is by the end of September.

That would allow the results to be collated in October and finally released in November.

The quantity of Wheat cents and world coins would be recorded as well.

Collectors willing to sort for varieties could be added to an “elite” group, and that data could be used to help determine population of those issues by variety, but that is not the main focus of the project.

“We might be able to, for once, come up with a ratio of mintage of the seven different varieties of 1982 cents [actually in circulation],” he said. The project is too large for any one person, but a group of people could make it work, Daughtrey said.

“I think it can be done,and have invited all of you to join me in helping find enough volunteers to sort pennies to make this project work,” he said. Constant updates are being posted to The Cent Project Facebook group.