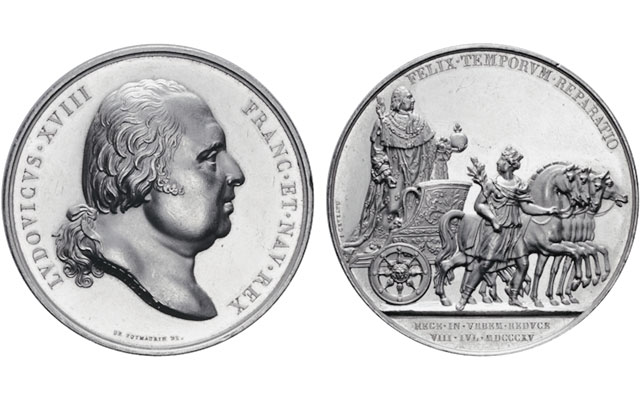 A platinum medal from 1815 honors French King Louis XVIII’s second return to Paris, which occurred July 8, after Napoleon Bonaparte’s June defeat at the Battle of Waterloo led to the emperor’s second exile. 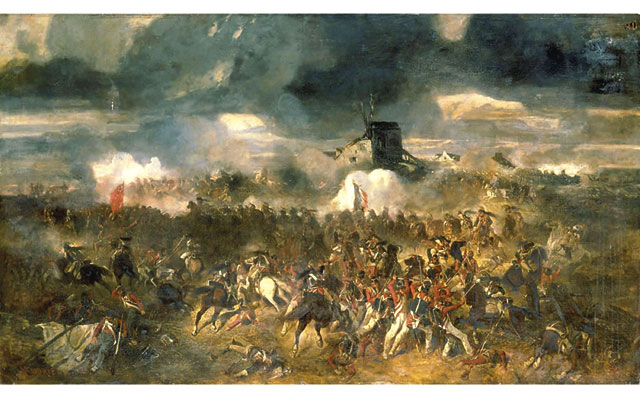 The Battle of Waterloo was a decisive loss for French emperor Napoleon Bonaparte, an event captured in Clement-Auguste Andrieux’s 1852 painting.

When one door closes, another one opens, as the old saying goes.

The defeat of French emperor Napoleon Bonaparte at Waterloo paved the way for the exiled King Louis XVIII to return to Paris and begin the Bourbon Restoration.

Such a magnificent occasion was the subject of a commemorative medal. A platinum version of the medal highlights Editions V. Gadoury’s Dec. 6 auction in Monaco.

Napoleon’s exile in Elba in 1814 is widely known, but the other would-be ruler of France was also exiled, twice, the first time beginning in 1791 during the French Revolution.

Louis XVIII spent 23 years in exile before returning in 1814 after Napoleon’s abdication following the capture of Paris. Napoleon was banished to Elba.

His escape and return to Paris triggered Le Cent Jours, or “the Hundred Days,” the period between his return on March 20, 1815, and the second restoration of King Louis XVIII on July 8, 1815.

During the Hundred Days, Louis XVIII went back into exile, until Napoleon met his Waterloo.

The medal in the auction proclaims the king’s second entry to Paris, in July of 1815.

The Battle of Waterloo was the final campaign of the Napoleonic Wars and Napoleon’s final grasp at the emperorship. Louis XVIII then ruled as king for just under a decade, until his death in 1824.

The obverse of the medal shows a bust of the king and the reverse shows the triumphant king being driven by a quadriga (four-horse chariot) led by an allegory of the city of Paris.

The quadriga is a familiar image, and recalls the quadriga that appears on the Arc de Triomphe de Carrousel built by Napoleon from 1806 to 1808 to mark his victories.

The obverse of the medal was designed by Bertrand Andrieu, whose work, Leonard Forrer wrote, in the Biographical Dictionary of Medallists, “bears the stamp of the epoch he lived in, when Napoleon was the Caesar of a modern Rome.”

The reverse was designed by Raymond Gayrard, a prolific French medalist, sculptor and poet. Forrer was somewhat complimentary of Gayrard’s artistic abilities, writing, “He adhered in his style to the old principles of the eighteenth century; nevertheless he is worthy to occupy an honourable place amongst the most eminent artists of his time.”

The medal weighs 150.7 grams, or nearly 5 troy ounces, and measures 30.9 millimeters in diameter.