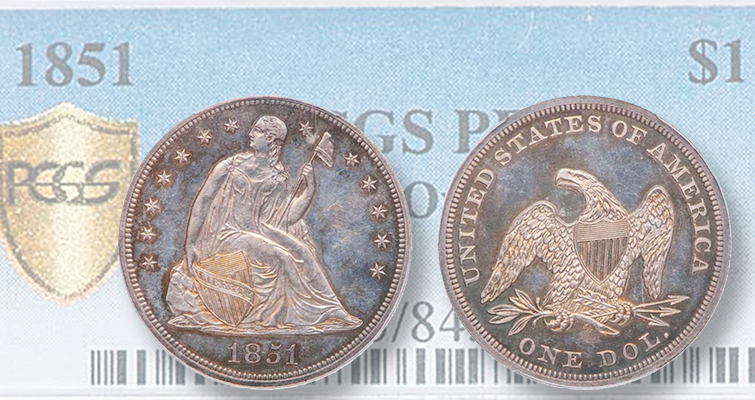 Among the stars in Regency Auction 27 by Legend Rare Coin Auctions, set for July 26 in Las Vegas, is this 1851 Seated Liberty dollar coin with an unusual New Orleans “O” Mint mark. 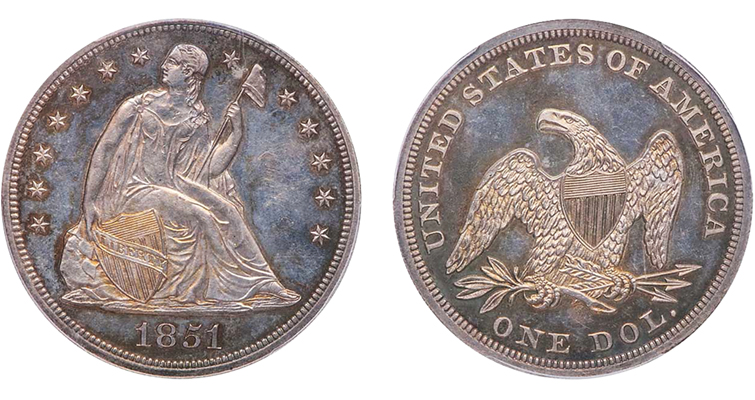 A Proof 63 1851 Seated Liberty dollar was possibly overstruck in the 1850s at the Philadelphia Mint on a New Orleans Mint dollar. The "O" Mint mark is visible,under the stem of the olive branch, but flat. 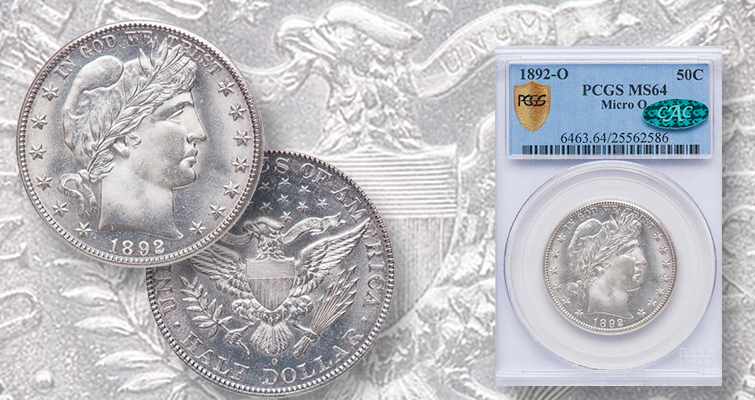 A New Orleans Mint mark, likely intended for a quarter dollar, instead was punched into a half dollar die, causing the 1892-O Barber, Micro O half dollar. This PCGS MS-64 example with a green CAC sticker is among the finest known of this rare variety. 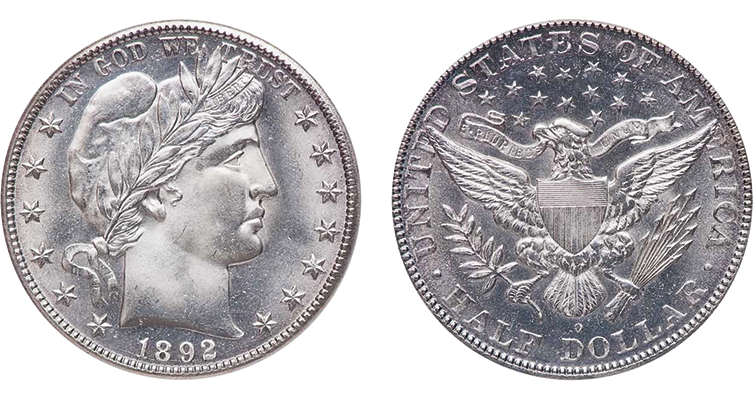 The smaller than expected Mint mark on some 1892 half dollars was identified by collectors soon after the issue was released, and about this example Legend writes, “Excellent in every possible way. Essentially of GEM quality. Fully frosted surfaces offer a brilliant satin luster that glows from all over.” 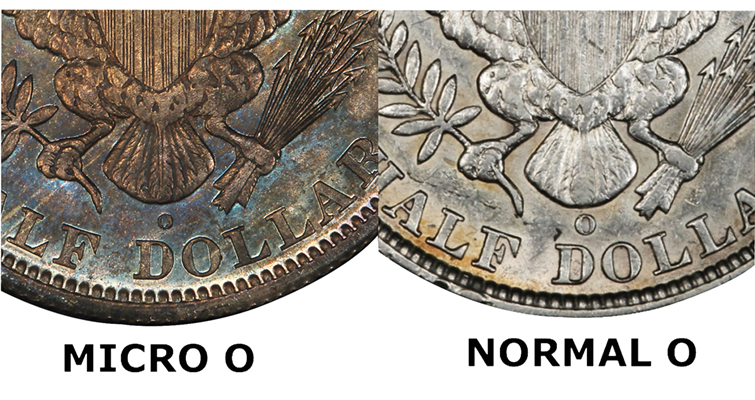 In a comparison of the “Micro O” and a typical New Orleans Mint mark on the two varieties of 1892-O Barber half dollars, the size difference is obvious.

The Regency Auction 27 by Legend Rare Coin Auctions is scheduled for July 26 at Caesar’s Palace in Las Vegas as part of the Professional Coin Grading Service Member’s Only show. Among the stars are two silver coins with unusual New Orleans “O” Mint marks.

A mysterious Proof 1851 Seated Liberty dollar likely struck over another dollar from the New Orleans Mint holds the top estimate in the sale at $280,000 to $320,000.

Legend calls the PCGS Proof 63 dollar “a coin that really invites the advanced collector to try and figure this one out,” writing, “It has intrigued numismatists since it was first discovered.”

Ron Guth observes on PCGS CoinFacts, “It is an authentic coin that was struck at the U.S. Mint, albeit under suspicious circumstances.”

Contemporary Mint records show that the New Orleans Mint struck no Seated Liberty dollars in 1851, and no Proof dollars were reported struck in 1851 at the Philadelphia Mint. Perhaps 30 to 50 restrikes were produced for collectors at the Mint later in the 1850s. In absence of specific documentation, Legend explains, “Clearly, at some point, a New Orleans mint silver dollar was placed into the coinage press in perfect alignment, showing the ‘O’ mint mark in its correct placement under the stem of the olive branch. Since the designs are exactly the same, the only traces of the host coin is the slightly flattened mintmark.”

When viewing the coin in 2002, Guth came up with two possible scenarios explaining its production. The first is that it combines an 1851 obverse with a New Orleans “O” Mint mark reverse, since the Mint mark is visible but flat, and that the Mint made an effort to efface the flattened Mint mark. The second suggests that a previously struck New Orleans Mint Seated Liberty dollar dated 1846-O, 1850-O, 1859-O or even 1860-O was overstruck to create this Proof 1851 dollar.

There Heritage wrote, “Examination of the piece by James C. Gray, Thomas K. DeLorey, the author, and several others, at the August 1992 American Numismatic Association Convention, reveals that the New Orleans dollar was filed down on the edge (perhaps so it would fit in the collar of the restrike dies) and rim, accounting for its light weight of only 400.3 grains (as compared to the 412.5 grain standard).”

Heritage added, “A conversation with Kenneth Bressett revealed that he had examined the coin along with several other prominent numismatists in 1983. At that time the owner swore everyone to secrecy who examined the piece. When asked why the piece was not listed in the Guide Book he said, ‘Because it is not a normal, authorized, official U.S. coin. However, it was made in the U.S. Mint.’ ” Bressett believed that the coin was struck using an O-Mint dollar as planchet stock, and that the faint Mint mark from the host coin remained visible after the dollar was restruck.

Legend concluded by observing, “This coin is UNIQUE, and once it sells, who knows when it will reappear on the market. If you want your Seated dollar set to really stand apart from every other set of Proof Seated dollars EVER assembled!”

Another coin with a New Orleans provenance is an 1892-O Barber, Micro O half dollar graded Mint State 64 by PCGS with a green Certified Acceptance Corp. sticker indicating quality within the grade.

On the brilliant, untoned half dollar, Legend writes, “Excellent in every possible way. Essentially of GEM quality. Fully frosted surfaces offer a brilliant satin luster that glows from all over,” calling out only a few scattered marks that keep it from a coveted MS-65 grade. For reference, one of the two PCGS MS-65 examples sold for $85,187.50 at Heritage’s January 2016 Florida United Numismatists auction.

Even low grade examples are coveted and well-worn Good examples trade at the $3,000 level. PCGS CoinFacts estimates that perhaps 100 are known with the “Micro O” Mint mark that is substantially smaller than the New Orleans “O” most commonly seen on half dollars.

Many believe that the variety is the result of a Mint mark punch intended for a quarter dollar — the same Mint mark is seen on some 1893-O Barber quarter dollars — and the rarity of the 1892 Micro O half dollars indicates that the mistake may have been discovered early, which limited production.

1892 marked the first year of Charles Barber’s new design for the half dollar (along with the Barber dime and quarter dollar). The smaller than expected Mint mark on some 1892 half dollars was identified by collectors soon after the issue was released, and Augustus Heaton identified the “Micro O” variety in 1893 in his book Mint Marks. Heaton wrote, “After a long interval the half dollar was struck in 1892 with new bust and Heraldic Eagle dies. The date is small, and a small O [the regular 1892-O] is directly under the middle of the eagle’s tail and over the D. There is one rare variety of this piece with an exceedingly small O, hardly larger than a period.”

Legend notes that this represents the offered coin’s first auction appearance and estimates it at $50,000 to $60,000.

Legend’s presale press release noted that the sale is anchored by eight collections, including several major Morgan and Peace dollar groupings that share a focus on beautifully toned coins. Founder Laura Sperber said, “If you think Las Vegas is HOT in July, step inside our auction room—the atmosphere will be even hotter! Legend Auctions is proud to have produced yet another mindboggling auction for the 27th Regency Auction.” 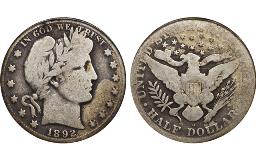 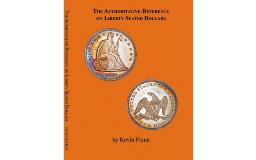 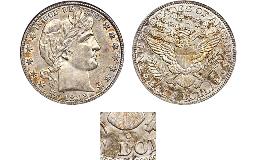