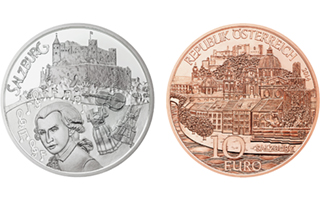 Austria’s newest commemorative coin from a series honoring each province celebrates Salzburg. The coin is issued in three versions: two in silver, one of which is shown left, and one in copper, at right. 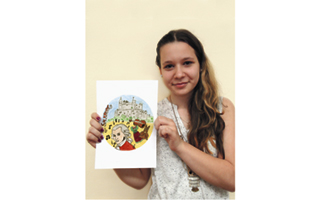 Designer Melisa Bejic based her winning design for the coins’ reverse on Salzburg’s musical connections.

If coins could talk, Austria’s new commemoratives might just emit sounds of music.

The Austrian Mint on May 7 is releasing the fifth 10-euro coin, dated 2014, in a series honoring each of the provinces. The newest honoree, Salzburg, is both the birthplace of child prodigy Wolfgang Amadeus Mozart and the setting for the famed musical and movie The Sound of Music.

Coin designer Melisa Bejic drew upon Salzburg’s musical connections for her reverse design, which won a competition among school-age children within the state of Salzburg.

The reverse depicts the imposing fortress that sits high above the city of Salzburg, with musical notes and a violin, one of Mozart’s favorite instruments, dancing around the musician.

The design is completed with examples of regional “tracht,” the traditional clothing of Salzburg for both men and women, still worn on a regular basis in the region.

The new coin is part of the “Austria by its Children” program, reflecting the design competitions used through each province to select the reverse of each coin.

Helmut Andexlinger engraved Bejic’s design, in addition to designing and engraving the obverse of the Salzburg coin.

The obverses in the series depict a UNESCO-designated site within the respective province. Salzburg’s obverse is also dominated by the Fortress of Salzburg (known as Hohensalzburg), with the old town (Altstadt) of Salzburg below; a representation of the Cathedral of Salzburg is distinguished by its large domed roof. Houses with typical architecture are shown along the Salzach River, which is covered with a pattern referencing the salt crystals key to the early power and wealth of the region. A local attraction, a large horse fountain, also appears in the design.

The obverse also names the country and year of issue, the denomination and the name of Salzburg.

Three versions of the 10-euro coin are being released: Proof and Special Uncirculated .925 fine silver versions, and an Uncirculated copper example.

All three coins weigh 17.3 grams and measure 32 millimeters in diameter.

The Special Uncirculated version is limited to a mintage of 40,000 pieces; the mintage limit is 30,000 for Proof examples. The copper coin is limited to 130,000 pieces and will be distributed in Austria at face value.