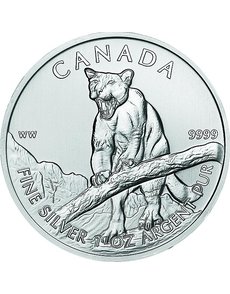 The cougar is featured on the newest issue in the Canadian Wildlife series of .9999 fine silver $5 bullion coins. 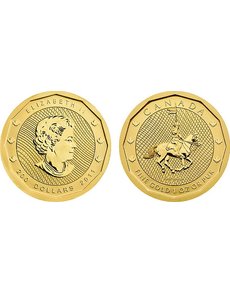 A member of the Royal Canadian Mounted Police rides tall on a new .99999 fine gold $200 coin from Canada, borrowing a design from a 1997 collector coin.

The RCM also announced that the third design in the Canadian Wildlife series of .9999 fine silver $5 coins will depict a cougar.

The reverse of the 2011 .99999 fine pure gold bullion coin features a Royal Canadian Mounted Police officer riding a horse at full gallop, within a circular frame of maple leaves, in a classic 1997 design by former RCM Master Engraver Ago Aarand.

The reverse of the Cougar coin, designed by Senior Mint Engraver William Woodruff, shows a cougar (or mountain lion) against a wilderness setting, perched on a fallen branch, baring its teeth.

The 2012 Cougar coin, part of the six-coin, three-year Canadian Wildlife series, is limited to a mintage of one million coins (the same mintage as the two previous releases, the 2011 Wolf and Grizzly Bear coins).

Both obverses carry the Susanna Blunt effigy of Queen Elizabeth II and the face value.

“The Royal Canadian Mint is proud to continue offering the world’s investors an exciting variety of the world’s purest gold and silver bullion coins at a time when bullion demand remains at record levels” said Ian E. Bennett, president and CEO of the Royal Canadian Mint. “Issuing products which stand out in the competitive bullion industry has helped the Mint achieve a reputation as the source of the world’s purest and most innovative bullion coins and we are pleased that these new coins continue providing customers our trademark quality and purity.”

The RCM does not intend for the Wildlife series to compete with sales of the traditional Maple Leaf program, which began with gold coins in 1979 and was expanded to include silver coins in 1988.

The special 2011 and 2012 bullion coins are issued at the same prices and with the same premiums as the standard Maple Leaf coins of the same specifications, according to RCM officials.

The 2012 Cougar silver bullion coins and 2012 RCMP gold bullion coins will soon be available through the Mint’s network of bullion distributors, after shipping begins in September 2011.

The Canadian Wildlife series is scheduled to continue through early 2013. Of the program’s six coins, three designs remain to be disclosed. The next design in the series will be announced early in 2012 for the second coin to be dated 2012. The final two coins are to be dated 2013.

Two coins are being released each year, one coin unveiled annually at the American Numismatic Association World’s Fair of Money, usually conducted in August, and one unveiled at the World Money Fair in Berlin, conducted in late January or early February.

The RCM does not sell its bullion coins directly to consumers; it instead offers them through a network of dealers and distributors, for a varying percentage above spot price, depending on the order size. The U.S. Mint employs a similar system for distributing its American Eagle bullion coins. ¦