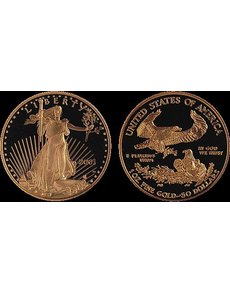 In most coinage series, low mintage issues are scarcer and more desirable than their higher mintage counterparts. So they almost always cost more. When a low mintage issue does not trade for a premium, it is called a “sleeper.”

A sleeper is a coin that has been overlooked by the marketplace. One day, it is hoped, its price will increase to reflect its true scarcity. Of course, sometimes the demand quotient never adjusts and sleeper coins stay overlooked forever.

Interestingly and inexplicably, the Proof American Eagle gold coin series is full of sleepers. Virtually every date trades for the same amount. The 1-ounce $50 coin with what appears to be the lowest mintage in the series, the 2001-W piece with just 24,580 sold (some sources cite sales of 24,555), costs the same amount as the most common, the 1986-W $50 coin (mintage: 446,290).

Among Proof gold American Eagles, the biggest sleepers of all might be the 2001-W issues.

The year 2001 was an unusual year for gold. The average price of gold had fallen to about $271 per ounce, after trading below $280 for more than two years. The last time that gold had seen such a low average trading price was 1978.

European central banks were dumping gold. The Bank of England sold 395 tons of gold between 1999 and 2001 at an average price of $275 per troy ounce

With gold in the dumps and in a period of constant decline, few collectors bought Proof gold American Eagles. Through the 2010 issue, the last year for which the U.S. Mint has final, audited sales figures, the 2001-W figures represent the lowest mintage numbers ever for Proof American Eagle 1-ounce gold coins, and the fractional pieces are among the lowest in the series (though sales for the Proof 2012 American Eagle gold coins are also low).

Yet, when you can find it, the 2001-W American Eagle Gold Proof set usually trades for little or no premium. Now that’s a sleeper!