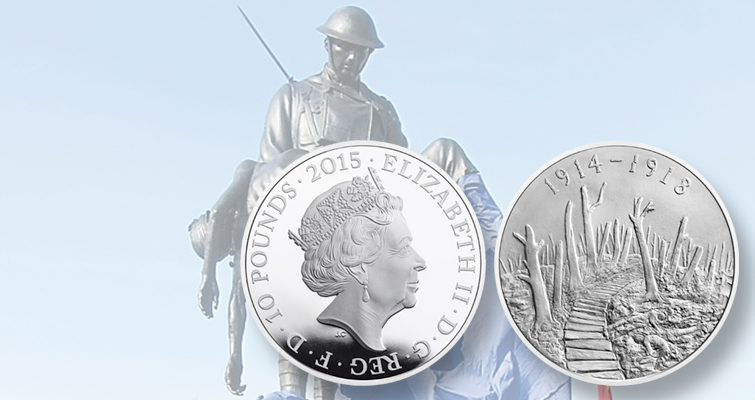 The Royal Mint’s second five-ounce coin in a series honoring World War I features a design based on scenes after a battle where American support was crucial to victory. The coin's designer also created a monument inaugurated in 2011 for the battle site.

Images courtesy of the Royal Mint and the United States Military, European Command. 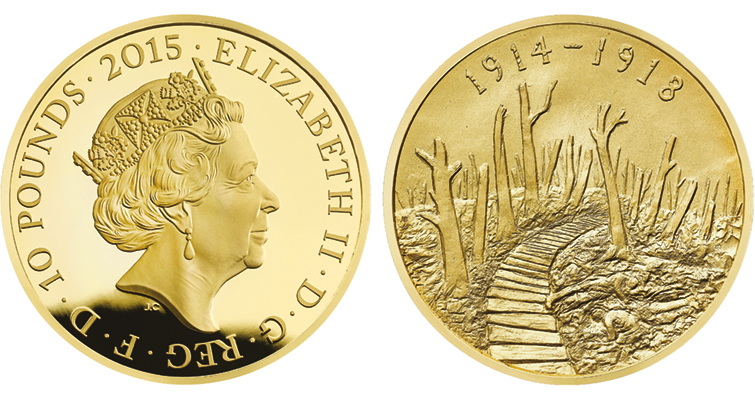 Images viewed during research for a monument to American efforts during World War I inspired the design of new coins from the Royal Mint.

On July 29, the Royal Mint released the second pair of five-ounce £10 coins in a series of five-ounce coins marking the 100 year anniversary of World War I.

Butler’s haunting scene depicts a path of duckboards flanked by war-ravaged trees, in what at first appears to be muddy ground, but that on closer inspection reveals outlines of indistinct figures — soldiers having laid down their lives, lost in the mud, with no hero’s grave.

The inspiration for the design derives from Butler’s years of research into the WWI, for which he created a memorial that was inaugurated in 2011. An American, the son of a soldier who earned a Purple Heart during WWI, paid for the memorial.

Butler’s memorial sculpture pays tribute to the 167th (Alabama) Infantry Regiment and the United States 42nd Infantry (Rainbow) Division of which it was part. The Rainbow Division was formed of units from 26 states and the District of Columbia.

Placed at the Croix Rouge Farm at Fère-en-Tardenois in France, the memorial statue depicts an American soldier carrying a lifeless comrade, in memory of the troops engaged in combat at the site in July 1918, securing a victory for the Allied forces.

In his research on the Battle of Croix Rouge Farm, photographs provided the sculptor with vivid insight into scenes such as that depicted on the new coin  — images of stark landscapes and boggy lands, often scattered with human remains — the aftermath of conflict.

On July 26, 1918, the 167th (Alabama) Infantry Regiment, along with the 168th (Iowa), attacked German positions in the Battle of Croix Rouge Farm. The Americans took heavy losses advancing across open fields (in contrast with the trench warfare typical of WWI) toward the farmhouse complex and in view of German machine gun nests in the nearby woods.

According to a report in the New York Times, “in the final push, Maj. John W. Carroll, the First Battalion’s commander, shouted: ‘Save your fire, men! We’ll give ’em hell with the bayonet.’ One soldier recalled ‘it was the only hand-to-hand fighting I saw during the war,’ and Gen. Douglas MacArthur later spoke admiringly of the Alabamians and Iowans, citing their gallantry.”

The Americans prevailed in the small but important battle, which occurred some 45 miles east of Paris as part of the Second Battle of the Marne.

The coins are accompanied by a booklet exploring the wartime events of 1915 and revealing the designer’s inspiration.

Shane Bissett, the Royal Mint’s director of commemorative coin and medals, said, in a press release: “James Butler’s atmospheric design captures the reality of war — the devastation and the desolation experienced by those who fought on the battlefields during the terrible conflicts of 1914 [to] 1918.”

Butler said that work on the statue and coin was special.

“I am not a particularly religious man, but when I have researched the subject over the years, I have been quite taken over and moved by the powerful imagery that surrounds the war. It reveals the horrors and the bravery of so many people often indistinguishable and sadly uncelebrated.”

The mintage limit for the silver coin is 500 pieces, and it retails for £395 each.

Want to collect other World War I-related coins? Coin World has you covered!

Malta, the 'Nurse of the Mediterranean,' marks World War I anniversary with silver €10