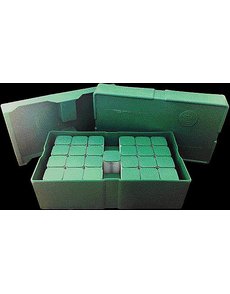 The U.S. Mint packages for sale to its authorized purchasers American Eagle silver bullion coins in 20-coin tubes that are placed into a sturdy green shipping container that the industry has named a “monster box.”

Image courtesy of vinylmayhem1996 on eBay.

As a new collector recently introduced to the hobby, I hear the use of the descriptor “monster box” when referring to American Eagle bullion coins. What is a “monster box”?

A “monster box” is the sturdy green box in which the U.S. Mint packages 500 of the American Eagle 1-ounce .999 fine silver bullion coins struck at either the West Point Mint or San Francisco Mint for delivery to the authorized purchasers.

The box consists of a top and bottom, along with an interior shelf that restricts the movement of the tubes of coins.

The 40.6-millimeter American Eagle silver bullion coins, each 2.98 millimeters thick, are first placed into tubes containing 20 coins each in an automated operation that also caps the tubes with a green cap denoting the United States Mint and Treasury.

The automated system puts the coins in the tubes and caps the tubes. Then 25 tubes filled with the American Eagle silver bullion coins are robotically placed in the bottom of a monster box that a robotic arm previously put into position on the assembly line.

Twelve rolls fit on either side of the box and one roll in the center.

Two gaps appear in the center of the box, one on each side of the center roll.

The box lid locks into place over the tubes and the shelf that holds the tubes in place.

The exterior lid is robotically fitted to the box.

The closed box is then wrapped with a strap denoting the source of the coins as either the West Point Mint or San Francisco Mint.

The U.S. Treasury seal is imprinted on the outside of the box.

The monster boxes of 500 coins each are picked up from the production facilities by transportation arranged and paid for by the authorized purchasers.

Empty monster boxes for storage purposes can often be found online from individual dealers or offered on eBay.

The public cannot buy the American Eagle silver bullion coins directly from the Mint. The coins are sold by the U.S. Mint directly to its network of high-volume, approved buyers who purchase minimum quantities of the coins per order at the closing London PM spot price per ounce plus a $2 premium per coin.

The coins are then made available to other dealers and the collecting and investing public.