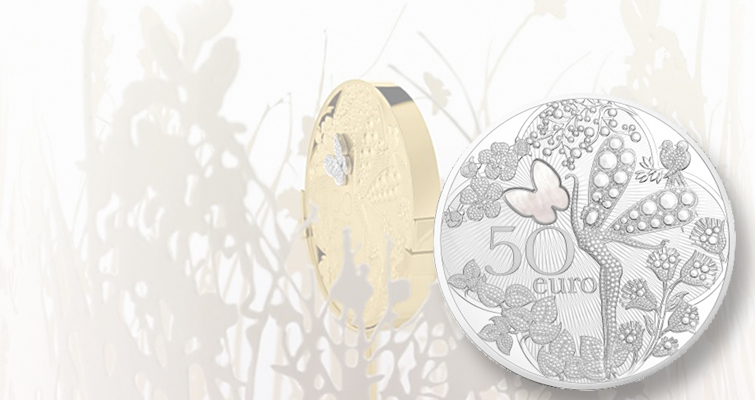 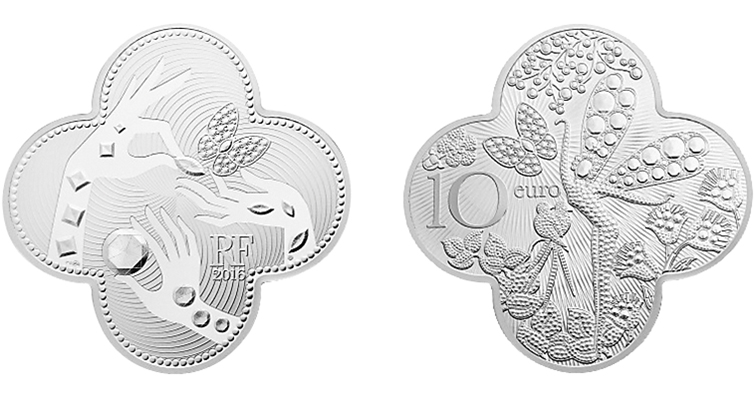 The Monnaie de Paris honors the artistic tradition of excellence of French jeweler Van Cleef & Arpels with a series of new coins, including the quatrefoil-shaped Proof .900 fine silver €10 coin. 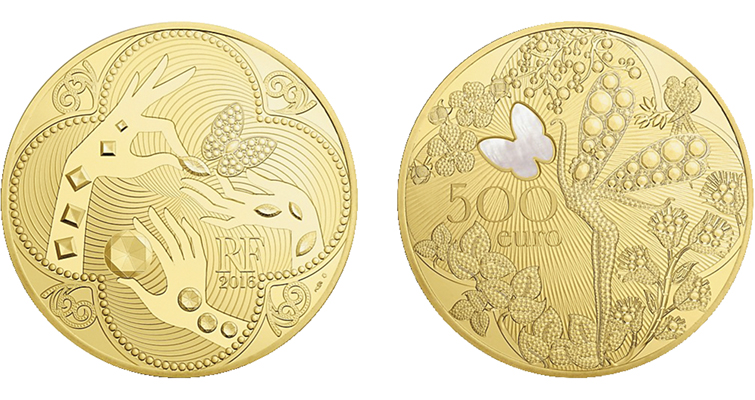 Mother of pearl inserts or inlays appear on two of the 2016 Van Cleef & Arpels coins from the Monnaie de Paris, including the Proof .999 fine gold €500 coin shown. 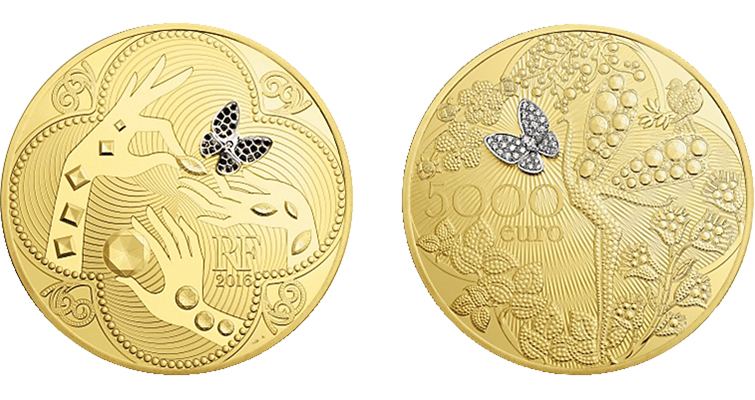 Design elements on all of the Monnaie de Paris’ 2016 Van Cleef & Arpels coins take their inspiration from jewelry collections of the past. Butterflies, beads, quatrefoil shapes and more all reflect various lines of jewelry, and on the Proof .999 fine gold €5,000 coin include diamonds.

The French jeweler Van Cleef & Arpels is honored with new coins from the Monnaie de Paris.

The company, which celebrates its 110th anniversary in 2016, is the subject of the Monnaie de Paris’ annual French Excellence coin program.

The centerpiece of the program is an ultra-low mintage kilogram gold €5,000 coin combining the craftsmanship of the honoree and the mint house making the coins.

Van Cleef & Arpels was founded in 1906 by Alfred Van Cleef and Salomon Arpels, when they opened their first boutique at 22 place Vendôme, a mecca of Parisian elegance, according to the Monnaie de Paris.

The coins feature a common design (save for the denomination) inspired by the jewelers’ “Two Butterflies” collection and uses embellishments to match the company’s brand of sophistication, according to the Monnaie de Paris.

“The coins of this series reflect the universe of Van Cleef & Arpels through patterns inspired by nature or the imagination such as birds, flowers or fairies,” the French Mint said.

“They make tribute to craft skills and to the tradition of the house of high jewelry.”

The obverse of each coin includes a beaded edge inspired by the Perlée collection, which Van Cleef & Arpels  has issued since the 1920s. Three hands gently set the butterfly with “diamonds” of various cuts (marquise, princess, brilliant) in this design, a reference to the “Golden Hands” style.

The obverse includes the RF initials of the French Republic, the year date, and the horn of plenty Mint master mark of the Monnaie de Paris.

The Proof .900 fine silver €10 coin and the Proof .999 fine gold €200 coin’s quatrefoil shape was borrowed from the Alhambra collection that debuted in 1960. The other coins in the issue are round.

The silver €10 coin weighs 22.2 millimeters and measures 40 millimeters in diameter from point to point. The coin has a mintage limit of 5,000 pieces and an official issue price of €82.

The Proof .950 fine silver €50 coin features a mother of pearl butterfly insert on the reverse. The silver €50 coin weighs 163.8 grams and measures 50 millimeters in diameter. The coin has a mintage limit of 500 pieces and retails for €508.

The centerpiece of the program, as stated, is the kilogram pure gold €5,000 coin.

The kilo coin features an insert, specially created by Van Cleef & Arpels, of a butterfly, on both sides.

The butterfly on the reverse is composed of real diamonds — 34 round diamonds, each measuring 0.67 carat, and one marquise-cut diamond of 0.15 carat representing the body (for a total of 0.82 carat).

On the obverse, the back of the butterfly is shown. The frame of this piece of jewelry allows one to understand the technique and knowledge associated with the crimping of the diamonds.

The coin is presented in a glass globe display case, allowing owners to display the coin under magnification while protecting the coin.

The kilo coin is placed in the globe amid a luxurious foliage delicately cut in paper to recall the patterns from the universe of Van Cleef & Arpels’ collections, according to the Monnaie de Paris.

A brass butterfly positioned at the top of the glass globe allows removal of the globe to position the coin.

In the lower part of the display case, two compartments contain elements that accompany the coin: a brochure, an authenticity certificate, a magnifying glass, a pair of gloves and a one-coin wallet.

The display case can be discreetly locked with three safety locks positioned on the base.

The Monnaie de Paris offers the coins through its store, which can be found online. 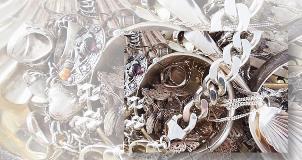