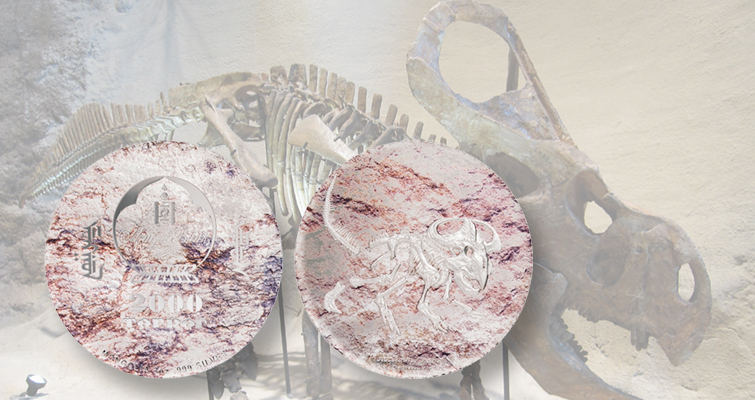 Mongolia’s newest silver collector coin captures the protoceratops, a dinosaur whose fossilized remains were found in that nation’s Gobi Desert in 1971.

Mongolia is celebrating its connection to dinosaurs with a new coin.

CIT Coin Invest AG has issued the second coin in its Prehistoric Beasts series, in 2019 showcasing the Protoceratops andrewsi.

In 1971 scientists discovered fossils in Mongolia’s Gobi Desert recording a moment in history as a velociraptor fought a protoceratops. The first coin in the series, the 2018 coin, honors the velociraptor, and the 2019 Proof .999 fine silver 2,000-togrog coin has now been issued for the protoceratops.

The dinosaur and date appears on the reverse of the coin. The emblem of the coin issuer, national name and other inscriptions appear on the obverse.

The fossils were the first evidence the velociraptor, with its razor-sharp claws, really was the dangerous predator it is presented as in Jurassic Park, according to CIT. “For the purpose of boosting the arc of suspense, the dimensions of the turkey-sized Velociraptor were drastically exaggerated, however,” the firm said.

That it dared to attack the herbivore protoceratops despite the herbivore’s  considerably heavier weight, 400 kilograms, is proven by the fossil known as “Fighting Dinosaurs” among paleontologists: while the velociraptor has rammed its claws into the protoceratops’ head and attempts to crack open the lower abdomen of its opponent with its beak, the protoceratops holds his opponent’s arm in his beak respectively.

Supposedly, both animals were mortally wounded in this fight. The desert sand then covered them and preserved their remains.

Both coins in the series have been created with a “Red Rock Finish,” a special technique that allows for the surface to resemble sandy rocks.

The 3-ounce coins measure 65 millimeters in diameter and have a mintage limit of 999 pieces each.

The Coin Shoppe in Canada offers the newest coin for $246.16 U.S., though that price may fluctuate with the exchange rate.

To order, or learn more, visit the firm’s website. 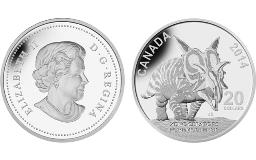 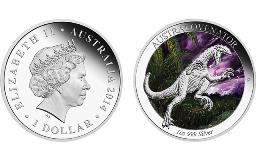