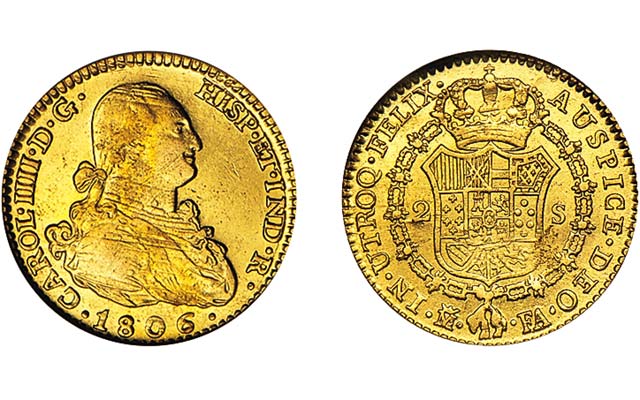 An 1806 Spanish gold doubloon is a coin that any “gold bug” would love. This coin was recovered from the wreck of the SS New York sunk in the Gulf of Mexico in 1846.

Bright and yellow, hard and cold;

Heavy to get and light to hold;

Spurned by the young, but hugged by the old

To the very verge of the churchyard mould;

Price of many a crime untold!

Good or bad a thousand fold!

This poem by Thomas Hood, part of a series of verses, “Rhymes of the Times, and Reason for the Season,” was printed in the New Monthly Magazine and Humorist published in London in 1841.

This week I continue my column on gold and gold coins, now with time out for some mentions of this precious metal in literature, phrases, and economics.

Gold more than any other metal has become synonymous with the concepts of quality and value, as noted last week in the title to this column. We have the Golden Rule, gilt-edge securities, the goose that laid the golden egg, golden opportunity, gold at the end of the rainbow, gold standard, worth its weight in gold, as good as gold, heart of gold, and more.

The hymn, “It Came upon the Midnight Clear,” has the lines,

With the ever circling years

Comes round the age of gold

Not all comments about gold are good.

A gold digger can be a miner or it can be negative — an opportunist, especially using romance as an entrée, who seeks your money.

Fool’s gold or pyrite might look like gold but isn’t. And, of course, all that glitters is not gold.

I’m not sure if this is good or bad: Silence is golden.

A “gold bug” is a person who believes that gold is the be-all and end-all of value. They write articles, run advertisements, hold seminars, and make predictions.

A few years ago at an American Numismatic Association convention, there was a program on gold. “All those who think gold will reach five thousand dollars per ounce raise your hands.” Nearly everyone did.

The term derives from “The Gold-Bug,” a still entertainingly readable 1843 tale by Edgar Allan Poe. Set on Sullivan’s Island off the coast of Charleston, S.C., a bite from a gold-colored bug leads to a cryptic message with a clue to buried pirate treasure.