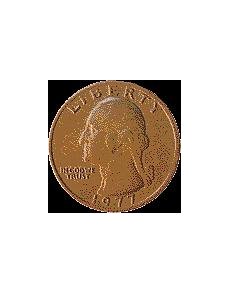 The obverse clad layer of this 1977 Washington quarter dollar fell off after blanking but before the strike. 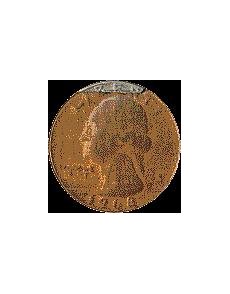 Most of the obverse clad layer of this 1968-D Washington quarter dollar broke off after the strike. Only a small section of cladding is visible at the top. 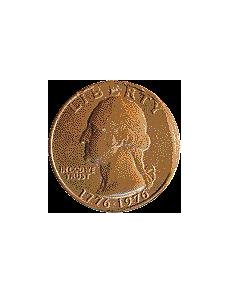 The obverse clad layer on this 1976 Bicentennial quarter dollar was missing from the bonded metal strip prior to its being rolled to final thickness. 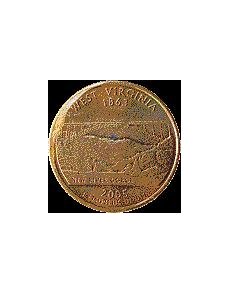 Although it is missing the reverse clad layer, this 2005-P West Virginia quarter dollar weighs almost the same as a normal quarter dollar. 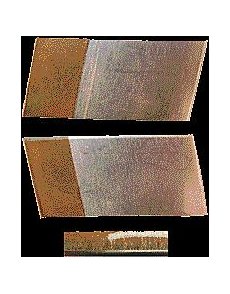 Both clad layers terminated prematurely on this piece of abnormally thick clad strip.

Beginning in 1965, circulation-quality coins from dimes to dollars have, for the most part, been a base metal composite arranged in three layers. The two outer layers are thin and on the vast majority of coins below the dollar denomination, composed of an alloy of 75 percent copper and 25 percent nickel. These two “clad” layers surround a much thicker layer of pure copper.”

The sandwich is assembled in the “bonding mill.” Here the three constituent coils of metal are fed between two rollers. Under immense pressure, the two outer strips of copper-nickel are fused to the middle strip of pure copper. The composite strip then makes several additional passes through the “rolling mill” until it is squeezed down to coin thickness.

Every so often a collector comes across a coin with the copper core partly or completely exposed on one face. These “missing clad layer” errors fall into several categories.

For the sake of simplicity, I will limit my discussion to coins in which the clad layer is completely missing on one face.

Most are bonding errors

The vast majority of missing clad layer errors are bonding errors. If insufficient tonnage is applied, or if the facing surfaces are inadequately cleaned, the clad strip fails to bond to the core strip. The loose clad layer then falls away some time after the coin blank is punched out by the blanking press.

Most times the clad layer falls off before the planchet reaches the coinage press, as seen in the illustrated 1977 Washington quarter dollar. Since a quarter dollar clad layer weighs approximately 1 gram, the error coin should weigh about 4.67 grams. This example weighs 4.7 grams.

Every so often the clad layer separates after a coin is struck. This leaves the exposed copper core with a blurred design, as shown by the accompanying 1968-D Washington quarter dollar. Despite a little bit of cladding retained at the 12:00 position, the coin is somewhat lighter than expected at 4.53 grams. This may be due to the clad layer having carried off a thin veneer of copper. Or perhaps the intact blank was underweight to begin with.

The rarest form of missing clad error is not caused by an insecure bond at all. It is a rolling error that traces back to the bonding mill. Three potential scenarios are involved:

2. The trailing end of one clad strip ends prematurely.

3. A large gap is present in one clad strip.

In each case, you end up with a stretch of composite strip composed of only two layers, one of copper and one of copper-nickel. This length of strip is eventually rolled to normal coin thickness during subsequent passes through the rolling mill. Any blank punched from this area will weigh the same as a normal coin.

The rarity of such errors may be due, in part, to the habit of trimming the ends of the composite strip before it is sent through the blanking press.

The first example of this rare error type is a 1976 Bicentennial quarter dollar. It weighs 5.39 grams. The reason it’s 0.28 gram short of normal weight is that the right side shows a taper. This is consistent with an origin at the leading or trailing end of the strip.

Also showing a slight taper is a 2005-P West Virginia quarter dollar sent to me several years ago by error dealer Fred Weinberg. At 5.57 grams, it’s only one-tenth of a gram shy of normal weight.

At the recently concluded Central States Numismatic Society convention, Weinberg handed me a piece of copper-nickel clad strip that shows the kind of rolling error I’ve been talking about (see photos). On each side, the clad layer runs out prematurely. The remaining stretch of pure copper would have yielded a full-weight, pure copper blank. This piece of composite strip is 2.37 millimeters thick, considerably thicker than a quarter dollar blank I measured (1.38 millimeters). I fully anticipate it being thicker than a half dollar blank as well. Evidently this piece of strip was sliced off before the composite strip had been rolled to final thickness.