Miracle of the Marne captured in Paris Mint medal 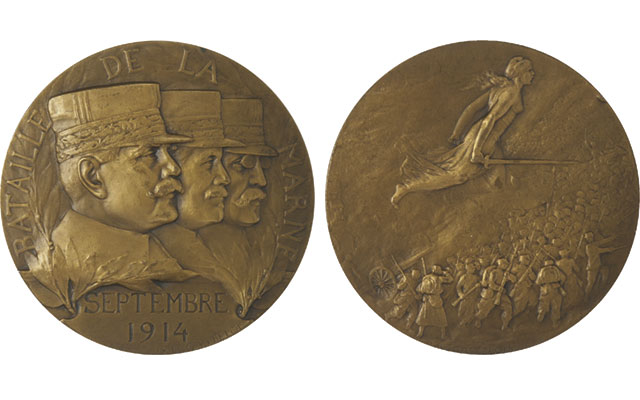 The reverse of this medal designed by Julien-Prosper Legastelois depicts a sword-wielding Warrior France in flight over teeming, ant-like masses of French infantry.

Its rich medallic tradition gave France a leading role in medallic records of World War I.

Longing to avenge its defeat in 1870 by the new German Empire and recover the “Lost Provinces” of Alsace and Lorraine, the French Third Republic worked for 40 years to create a network of alliances with Great Britain and Russia to encircle Germany.

Its battle plan, drawn up by Gens. Joseph Joffre and Ferdinand Foch, depended on the continued neutrality of Belgium. The plan projected a vigorous French advance into central Germany while Russian advances in the East tied up German forces in East Prussia. The enemy would be crushed between their armies and swift victory assured.

Germany relied on the decades-old Schlieffen Plan to sweep through neutral Belgium, wheel around the French capital of Paris with some 1.5 million men and swiftly take France out of the war.

German commanders Helmut von Moltke and Alexander von Kluck set their plan in motion in August 1914 at the start of the war.

A turning point in the first disastrous weeks was the epic Battle of the Marne, Sept. 5 to 12, 1914, commemorated by a splendidly detailed 68-millimeter medal by Julien-Prosper Legastelois.

At the left is Gen. Joseph Jacques Joffre, who held the French line against massive German assaults.

Next is Gen. Joseph Simon Galliéni, brilliant in French colonial wars and military governor of Paris. Galliéni was credited with the “Taxis of the Marne,” commandeered to rush troops to the battlefield and prevent threatened collapse.

Third is Gen. Michel Joseph Maunory, who held the line of the Ourcq against Kluck’s assault.

The reverse presents sword-wielding Warrior France in flight over teeming, ant-like masses of French infantry in the baggy scarlet trousers, horizon blue tunics and kepis that were the uniform of 1914. No helmets are worn, and only a single officer on horseback and a single piece of artillery are in sight. Appalling casualties brought rapid uniform reform and introduction of the steel “Adrian” helmet used for the rest of the war.

Still struck by the Paris Mint, the medal captures the realities of the opening weeks of war before static trench warfare took over the Western Front.