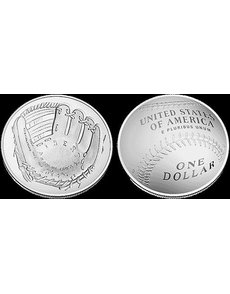 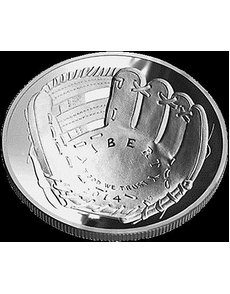 The depth of the basin on the concave obverse is shown in this art rendering of the silver dollar.Image courtesy of United States Mint. 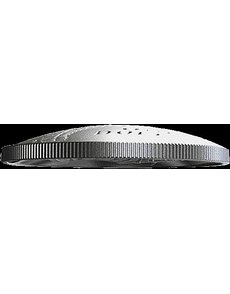 The dome on the convex reverse is measured from the top of the rim to the apex of the reverse coin design.Image courtesy of United States Mint. 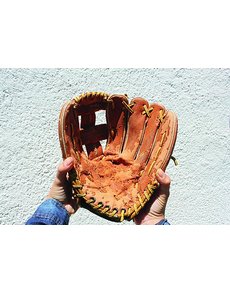 A cherished, well-used baseball glove from her childhood served as McFarland’s inspiration for her winning coin design for the shared obverse.Image courtesy of Cassie McFarland. 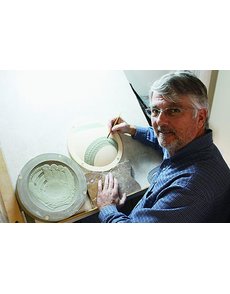 Everhart at work on the models.

McFarland’s winning design will appear on the concave obverse of the copper-nickel clad half dollar, silver dollar and $5 gold half eagle in the program. McFarland’s design was one of 16 finalist designs chosen from 178 design entries submitted in an open design competition conducted from April 11 to May 11. The design was approved by Miller Sept. 9.

The three commemorative coins are the first U.S. coins to be struck with a concave obverse and convex reverse.

“Ms. McFarland’s design of a simple baseball glove, which is paired with a baseball on the coin’s reverse, evokes childhood emotions in us all,” Baseball Hall of Fame President Jeff Idelson said Oct. 16. “It represents a game of catch in the backyard or a trip to the ballpark with Mom and Dad. These are memories millions of American’s hold dear, and ones we’ll all be able to cherish forever, through this commemorative coin program design.”

McFarland is a practicing figurative painter and photographer in San Luis Obispo, Calif. She submitted her proposed design on the final day of the competition. McFarland used as her design inspiration a cherished, well-used glove from her childhood while growing up in Roseville, Calif.

The announcement of McFarland’s winning design was posted late Oct. 15 on the Mint website. A planned Oct. 8 event to unveil the designs was canceled because of the government shutdown.

Despite the ceremony’s cancellation, McFarland still trekked to the nation’s capital to visit friends and tour the city.

McFarland said that she met with Deputy U.S. Mint Director Dick Peterson on Oct. 7 at Mint headquarters along with other Mint representatives.

During her visit, McFarland was provided a test strike of the Proof 2014-P National Baseball Hall of Fame silver dollar, housed in a special holder. Peterson allowed her to carry the coin around with her during her Mint visit and then she had to give it back.

McFarland said she and Peterson autographed each other’s copies of the most recent issue of Memories & Dreams magazine, published by the Hall of Fame for HOF museum members, which illustrates the 2014 commemorative coins. Visit http://baseballhall.org/ for museum membership information.

In addition to eventually being compensated $5,000 for her winning design, McFarland will also have her italicized designer’s initials, CM, appear in her design to the left of the date at the base of the glove’s thumb pocket on all three coin denominations.

McFarland is filling out the paperwork to become an independent government contractor. That would be advantageous should she seek a spot as a member of Mint’s Artistic Infusion Program. The Mint will seek AIP applications later this year.

U.S. Mint Sculptor-Engraver Donald Everhart II is sculpturing McFarland’s obverse design. His initials, DE, will appear to the right of the date.

McFarland’s obverse for the three denominations is being paired with Everhart’s reverse depicting a baseball of the style used by Major League Baseball.

Everhart’s designer’s initials appear in the bottom field to the right of the baseball stitching.

For his design, Everhart placed the inscription UNITED STATES OF AMERICA on two lines above E PLURIBUS UNUM, and centering the text on the axis of the ball to line up with ONE DOLLAR. “The idea was to use the convex side to the fullest extent and capture the illusion of a baseball,” Everhart said. “With the extreme dome on this coin, it was imperative that we take advantage of it and make it work for us.”

According to the Mint, the dome is measured from the top of the rim to the apex of the convex reverse design — 0.085 inch on the gold coins; 0.150 inch on the silver dollar; and 0.058 inch on the half dollar.

“I used a wireframe sphere to build my text on, so that the wrapping-around effect of the lettering would be convincing.” Everhart said. “Additionally, I made the seams progressively smaller as they approached the edge of the design to further enhance the illusion of roundness and perspective. Because of coinability issues I did not extend the seams the whole way to the edge.”

Everhart said he first hand-sculptured the ball in clay, and then made a plaster cast. “I worked a bit in the negative, then cast it again and finished it off in the positive plaster,” he said. “From this point, my text was applied digitally.”

Everhart was also tasked with sculpturing McFarland’s design to make it compatible with his reverse.

“I wanted the glove side of the design to look as closely as possible to a real glove,” Everhart said. “At home I found my son’s Little League glove, which happened to be an almost exact duplicate of the drawing Cassie McFarland used when she did the original design.”

Employing the real glove for comparison purposes, Everhart says he was able to add details to McFarland’s design. “Some of these details included the way the glove wrinkles around the fingers near the main part of the glove and the flattening of the thumb part which I have seen in every glove I had as a kid playing baseball,” Everhart said. “Also, looking closely at the glove I noticed that the leather had a certain texture that is very indicative of leather. This texture was also incorporated into the sculpt digitally.”

While sculpturing, Everhart also had to take into account the height of the coin’s relief, “especially near the outer parts of the design. In order to fill completely when struck, I had to keep these areas relatively low.”

Everhart made additional modifications to the winning design as submitted by McFarland.

“The original drawing had a wreath motif around the outer part of the glove. This was removed because we felt it would be confused with the stitching,” Everhart said. “When I removed the wreath, I had to add stitching that would have been in the areas where the wreath had been removed. We also cleaned up the hand lettering a bit and warped the lettering to conform to the topography of the glove.” ¦