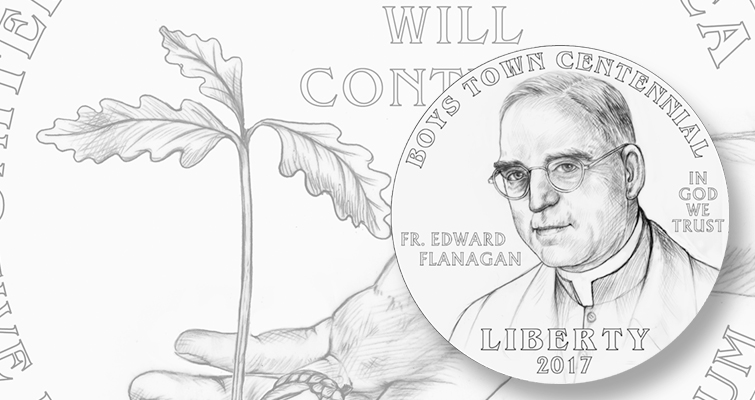 There would be no Boys Town Centennial to celebrate with commemorative coins in 2017 had it not been for the efforts of founder Father Edward J. Flanagan. 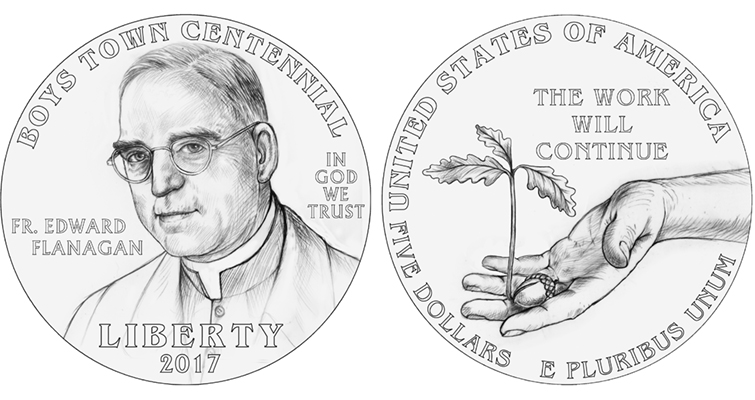 Boys Town founder Father Edward J. Flanagan will be recognized on the obverse of the 2017 Boys Town Centennial gold $5 half eagle. 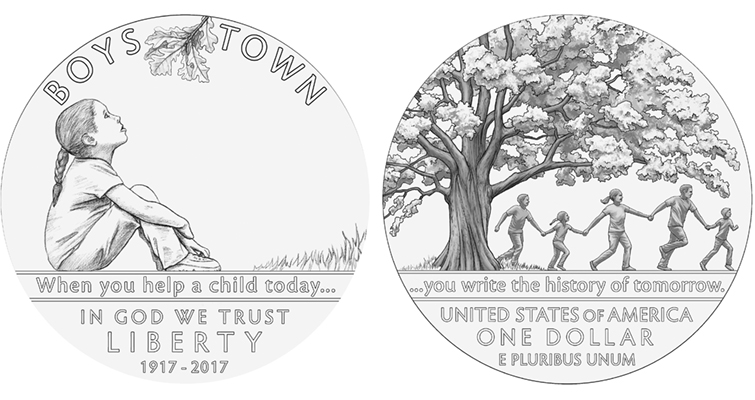 The designs given final approval for the silver dollar were originally created for the half dollar. 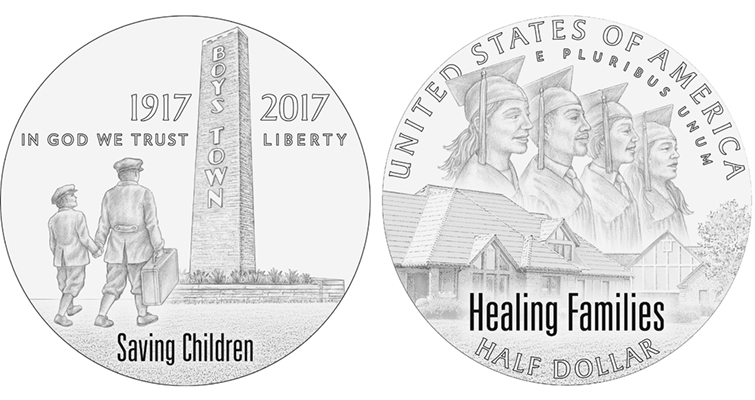 The designs approved for the 2017 Boys Town Centennial copper-nickel clad half dollar were originally submitted to the Citizens Coinage Advisory Committee and Commission of Fine Arts for consideration on the silver dollar.

Surcharges added to the purchase price of each gold coin of $35, $10 for the silver dollar and $5 for the copper-nickel clad half dollar, are to be paid to Boys Town to carry out its mission after the U.S. Mint recoups its production and associated costs.

The Aug. 23 coin unveiling ceremony was a joint event between the U.S. Mint and Boys Town. The designs were approved by Deputy Treasury Secretary Sarah Bloom Raskin.

“Each time a person looks at any one of these unique designs, it will spark an interest in learning about the history of Boys Town, acknowledging the extraordinary efforts made by this organization to give comfort and purpose to children in need, and recognizing the significant contributions of Father Flanagan,” said United States Mint Principal Deputy Director Rhett Jeppson.

The approved $5 designs were recommended by the Citizens Coinage Advisory Committee. The Commission of Fine Arts recommended a different set of designs.

The designs approved for the silver dollar were originally submitted for CCAC and CFA consideration for the copper-nickel clad half dollar. The CCAC recommended the approved silver dollar designs.

The half dollar obverse depicts an older brother holding the hand of his younger brother in 1917. They walk toward Father Flanagan’s Boys Home and the 1940s pylon representing what would become Boys Town. Inscriptions are BOYS TOWN, 1917, 2017, IN GOD WE TRUST, LIBERTY, and SAVING CHILDREN. The obverse was designed by AIP Designer Chris Costello and sculptured by Mint Sculptor-Engraver Renata Gordon.

The designs approved for the copper-nickel clad half dollar were originally submitted for consideration for the silver dollar. The approved designs were recommended by the CFA.

The Mint will announce the release date and additional pricing information for the Boys Town Centennial Commemorative Coins prior to their release in 2017. 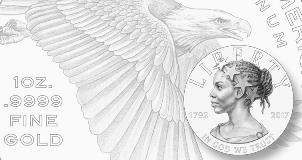 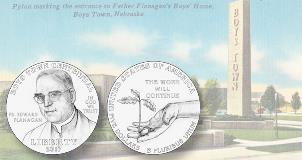