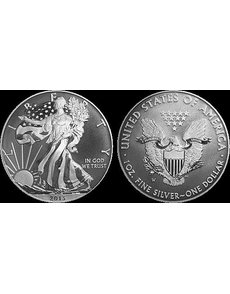 Elements of the upcoming Enhanced Uncirculated 2013-W American Eagle silver dollar will exhibit one of three different finishes — two of them different intensities of laser frosting, and one of brilliant polish. The dark appearance of the coins is the result of West Point Mint officials photographing a coin through a microscope.

Elements of the field and devices of the upcoming Enhanced Uncirculated 2013-W American Eagle silver dollar will exhibit one of three different finishes.

The Enhanced Uncirculated 2013-W American Eagle silver dollar is to be included later this year as part of a two-coin silver American Eagle set to be offered to U.S. Mint customers. The set will celebrate the 75th anniversary of what is now known as the West Point Mint.

The Enhanced Uncirculated coin will be available only in the two-coin set.

The set was referred to as the 2013 American Eagle West Point Two-Coin Silver set when U.S. Mint officials announced the new product option Jan. 15. The name is subject to change.

The other coin in the set will be a Reverse Proof 2013-W American Eagle silver dollar, which will also be available only in the set.

The U.S. Mint expects to begin accepting orders for the 2013 set sometime this spring. Pricing and other information are expected prior to its release.

The Enhanced Uncirculated silver American Eagle is not the first U.S. Mint experiment with multiple finishes on one numismatic item.

White said multiple finishes were also used on elements of the 1-ounce .999 fine silver September 11 medals produced at the West Point Mint and Philadelphia Mint in 2011 and 2012.

For the Enhanced Uncirculated 2013-W American Eagle, the different finishes are being executed through the use of die auto polishing and laser frosting.

“The dies are first auto-polished using a horsehair brush and then laser frosted using a heavy or light laser frost application,” according to Mint responses to questions posed by Coin World. “The result is that the dies have three distinct finishes (heavy frost, light frost, brilliant polish). Finally, the dies are given a PVD coating to increase die life.”

PVD, or physical vapor deposition, is a process that involves evaporation and deposition of a material. The thin chrome coating applied by the Mint through the PVD technique known as “sputtering” helps to protect the dies during striking, by adding lubricity that reduces friction that could cause die degradation, according to U.S. Mint officials.

The PVD process is more environmentally safe than the previous hexovalent chrome process, according to the Mint.

The fields on the Enhanced Uncirculated 2013-W American Eagle’s obverse and reverse will have the light frosted finish. Each side will also have two other finishes.

On the obverse of the coin, a brilliant polished finish was executed on the mountains, what would be the red stripes and blue field of the United States flag, the date and Liberty’s sandals. The remaining elements and lettering on the obverse have the standard heavy frosted finish.

On the reverse, the ribbon in the eagle’s beak, the arrows and the oak branch all have a brilliant polished finish. The lettering and other design elements on the reverse have the heavy frosted finish.

White said at this time it has not been determined whether the “Enhanced Uncirculated” superlative will become the norm for Mint-marked, non-Proof silver American Eagles, replacing the standard, burnished Uncirculated version.

The standard, burnished Uncirculated 2013-W version is scheduled to go on sale from the Mint on May 28.

The Enhanced Uncirculated silver American Eagles are currently being struck on Graebener GMP 360 presses, with the dies oriented vertically. The hammer die represents the obverse and the anvil die the reverse — the same orientation as other U.S. coins.

While the coin has some polished, reflective surfaces similar to those found on Proof coins, and is struck multiple times rather than once, it is not a Proof piece, according to the Mint.

The Enhanced Uncirculated coins are being struck three times on specially burnished planchets, with a striking pressure of 210 metric tons per strike to bring up design details.

Since most of the U.S. Mint’s premium numismatic coins, both Uncirculated and Proof, are struck multiple times using specially prepared dies, the number of strikes is not necessarily an indicator of what distinguishes a Proof coin from an Uncirculated coin.

“The horsehair brush automated process creates a reflective surface of artwork elements, but cannot achieve a smoothness of the felt pad,” according to the Mint’s response to Coin World. “The felt pad cannot polish relief and is generally used to polish the field of a Proof die, resulting in a mirror-like finish. The auto polishing with a horsehair brush results in a brilliant uncirculated finish. The dies then go through a laser frosting process to achieve a heavy laser frost or a light laser frost in areas as described above.”

Before striking, the planchets for the Enhanced Uncirculated coin are burnished using steel shot, soap and water.

Proof coins are produced on planchets polished to a uniform mirror-like finish.

The West Point Mint opened as a silver bullion depository in 1937. It first struck coins in 1974. The facility was elevated to full Mint status in 1988.

To date, the United States Mint has struck American Eagle silver coins in the following finishes:

? Uncirculated, used to describe bullion coin versions from 1986 to 2006, when the term “Uncirculated” was dropped by the Mint in promoting the bullion pieces.

? Reverse Proof, used first in 2006 and periodically since then.

? Uncirculated, for collector versions, introduced in 2006 and used periodically since (called “Burnished Uncirculated” by collectors and dealers).