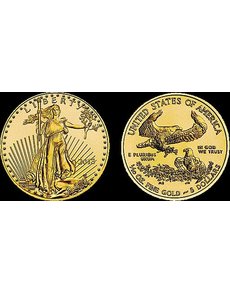 The U.S. Mint still has in inventory 2013 American Eagle and American Buffalo gold bullion coins as it begins to accept orders for 2014 issues. A 2013 tenth-ounce gold American Eagle is shown.

The United States Mint will fill orders for certain gold bullion coins exclusively with 2014 issues for only two weeks before filling purchases with a mixture of 2013 and 2014 coins.

Starting Jan. 2, orders from authorized purchasers would be accepted for the 2014 1-ounce and tenth-ounce gold coins for a two-week period, with the Mint fillings orders exclusively with those coins. Starting Jan. 20, the Mint will fulfill any orders for those two sizes of coins by mixing the 2014 coins with remaining 2013 pieces on a one-for-one basis.

The ordering restrictions for the 1-ounce and tenth-ounce gold coins are in addition to the remaining inventories of 2013 American Eagle quarter-ounce and half-ounce gold coins. Sales procedures for those coins were outlined in a memo sent to authorized purchasers in November.

The November notice to authorized purchasers also noted that the Mint still had in inventory an undisclosed number of 2012 American Eagle quarter-ounce and half-ounce gold bullion coins to exhaust.