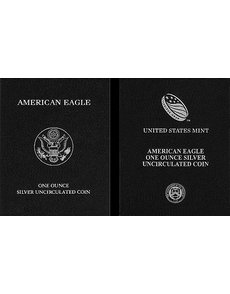 The Uncirculated 2012-W American Eagle silver dollars are being shipped in two different packages — old style, left, and the new trademarked brand logo box, right. The old boxes are being used up to reduce waste, an official said.

Collectors who have ordered and received more than one Uncirculated 2012-W American Eagle silver dollar may experience a little bit of the old with the new in the packaging.

White explained why boxes with different cover designs were being used.

“In order to reduce waste, we made a determination to consume all remaining packaging that had the prior graphic elements before moving to the current logo. We are not able to honor requests for a particular logo, as fulfillment will be random. For this same reason, returns requested for graphic elements will not be accepted.”

Packaging includes black boxes with silver-colored lettering, bearing either the U.S. Mint’s new brand logo, introduced in 2010, or the familiar design imprint used since the introduction of the Uncirculated 2006-W American Eagle silver dollar. Customers have received their 2012 coins packed in boxes of either style.

Purchasers of a single 2012 coin could receive their order in either the old or the new box, and if multiple coins are ordered, coins will arrive packaged in either all new or all old boxes, or some mixture of both.

The older style box has “AMERICAN EAGLE” in a single line at the top, with the eagle side of the Great Seal of the United States at the center, and “ONE OUNCE / SILVER UNCIRCULATED COIN” in two lines below.

The new box has the trademarked U.S. Mint logo resembling an Ultra High Relief coin, with a flag fragment on the one visible side and “E PLURIBUS UNUM” on the edge.

Directly below is “UNITED STATES MINT,” with “AMERICAN EAGLE / ONE OUNCE SILVER / UNCIRCULATED COIN” in three lines at center, with the Treasury seal below.

Florida collector Wayne Johnson informed Coin World of the packaging differences on Aug. 17, the day he received the five Uncirculated silver American Eagles he ordered, with three arriving housed in the new boxes and two in the old boxes.

Johnson said he’s been ordering products from the U.S. Mint since 1963, “and it is a first for me to see something like this.” ¦