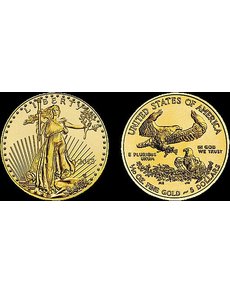 Because of a depleted inventory of American Eagle tenth-ounce gold bullion coins, sales of the coins to authorized purchasers continue suspended until sufficient stocks are restored.

The West Point Mint is continuing to build up its inventory of 2013 American Eagle tenth-ounce gold bullion coins to meet public demand so that a sales suspension to authorized purchasers implemented April 22 can be lifted.

Tom Jurkowsky, director of the U.S. Mint’s Office of Public Affairs, said April 30 the suspension was still in effect and would remain so until inventories are sufficiently replenished.

The volatility in the price of silver has also pushed demand for silver American Eagles to record levels.

Jurkowsky said global demand for gold and silver has stretched Mint production, which is limited by the number of blanks it can secure.

Year-to-date demand alone for the tenth-ounce gold American Eagles is up 118 percent, with overall market demand for all four sizes of American Eagle gold bullion coins up more than 100 percent, compared to the same time last year, according to U.S. Mint officials.

During the first four months of 2013, gold American Eagle sales to authorized purchasers totaled 502,000 ounces compared with 230,500 ounces for the same period in 2012.

Demand for American Buffalo gold bullion coins through the first four months of calendar year 2013 reached 132,000 ounces — the total for all of 2012.

The U.S. Mint is continuing to do everything possible to find additional suppliers; it currently has three suppliers for American Eagle silver bullion coin blanks.

“The United States Mint acknowledges that its suppliers of precious metals are doing their best to meet our demands for blanks,” according to Jurkowsky. “However, the Mint understands the challenges that these suppliers face in meeting not just the Mint’s demand, but the global demand.”

Jurkowsky said the skyrocketing demand for all silver bullion coins has placed a significant strain on planchet suppliers, including those that supply the U.S. Mint.

In January, the U.S. Mint was forced to put sales of American Eagle silver bullion coins on an allocation basis to its authorized purchasers. Sales remain allocated.

“This volatility makes forecasting extremely difficult as demand is driven by external factors beyond the Mint’s control,” Jurkowsky said.

“The situation at our suppliers is understandable. The investment required to establish additional capacity requires careful financial analysis, and the demand from global mints did not exist throughout the early part of the last decade. The United States Mint has worked diligently over the last five years to grow our supply of silver blanks,” he said.

Jurkowsky added, “Overall, we attempt to manage our supplies in a manner that ensures we have a sufficient number of coins to meet the weekly demand of our authorized purchasers.

“When that demand exceeds our ability to acquire a sufficient number of blanks, we then go on allocation until our inventories can be rebuilt again and the supply of blanks increased so that time spent on allocation is minimized,” Jurkowsky said. ¦