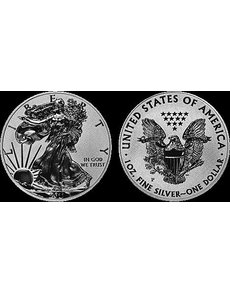 At least one version of the survey suggested that several special American Eagle silver coins will be offered in 2012 and later years. Despite the language in that version, plans may not be finalized as yet, however.

“Generally, when potential products are referenced in a survey or market research study like the one that was recently promulgated, they should not be interpreted as products we will definitely produce and offer,” according to a statement released Jan. 25 by Tom Jurkowsky, director of the U.S. Mint’s Office of Public Affairs. “We field surveys like this routinely in order to gauge the interest of our customers (actual and potential) in various current and potential products and to improve our ability to understand and meet likely customer demand for the products we do launch.”

Selected U.S. Mint customers were contacted via email by National Analysts Worldwide, a Philadelphia firm that the Mint hired to conduct the survey in its various forms, and were offered opportunities to participate in the online survey. At least three slightly different versions of the survey were offered.

The survey suggests the Mint is considering the release of a special limited-edition 2012-S American Eagle set containing two American Eagle 1-ounce silver coins, one a regular Proof and the other a Reverse Proof, both struck at the San Francisco Mint with the S Mint mark and both available only in the set. The year 2012 is the 75th anniversary of the current San Francisco Mint facility, although the anniversary is not mentioned in the survey.

The survey describes the two-coin set as the first of a planned series of two special sets to be issued per year containing “unique” coins available only in the sets.

Portions of the survey were posted online over the Collectors Universe (www.collectors.com) U.S. Coin Forum by a survey participant.

Coin World obtained from two other collectors complete copies of the surveys they participated in, with both surveys containing specific details about other special sets that were not addressed in the survey questions posted at Collectors Universe. The two complete surveys also contained details different from one another as to special sets under consideration, their mintage limits and household ordering limits.

Several sets of special American Eagle silver coins are mentioned in the various versions of the survey, although Jurkowsky stresses that the Mint has not definitively decided on whether to issue any special sets.

The version of the survey posted on the Collectors Universe U.S. Coin Forum states the U.S. Mint “may consider” issuing a two-coin Proof and Reverse Proof 2012-S American Eagle set. Specifically, the version of the survey posted at the forum states: “The U.S. Mint plans to manufacture 300,000 of these sets. Once these sets are sold, no additional sets will be available. There will be a purchase limit of 5 sets per household. The price of this set will be approximately $125. ... This set will be the first in a series of similar special Silver coin sets that the U.S. Mint will begin producing twice per year, beginning in 2013. This first set would be available in Summer 2012, with the second installment (featuring additional unique coins) arriving in late 2012.”

The statement about two sets being offered per year beginning in 2013 is absent from the survey questions in the two different complete surveys Coin World received independently from two different Mint customers.

While the two complete surveys obtained by Coin World indicate the Mint is considering a two-coin set to retail for approximately $125, they provide different details on possible edition sizes and household purchase limits. One of those two surveys states the two-coin silver American Eagle sets being considered would be limited to a maximum of 200,000 sets, with a household ordering limit of two sets. The other complete survey states the limits as 100,000 sets and one set per household.

Jurkowsky said the survey, contracted through National Analysts Worldwide, was directed to approximately 100,000 Mint customers who purchased American Eagle silver coins and other precious metals products from the Mint over the past several years. The survey was accessed online by participants using special codes. The firm, which has conducted surveys for the Mint in the past, was granted access to the Mint’s emailing list for the purposes of the survey.

The survey, aimed at identifying how the U.S. Mint can improve the products and services it provides, was premised upon an analysis of the U.S. Mint’s handling of sales in 2011 of the limited-edition five-coin American Eagle 25th Anniversary Silver Coin set, Jurkowsky said.

Mint officials addressed what was done right in offering the 2011 set, what was done wrong, and what could be done to improve the process for future releases, Jurkowsky said.

Some collectors were highly critical of the Mint’s handling of the 25th Anniversary set release, limited to 100,000 sets, five per household, which sold out in under five hours.

Jurkowsky said the Mint is seeking, through the survey, to identify customer demand for current and potential products.

The Mint’s survey was directed to participants Jan. 19 and 20; two deadlines for participation are listed on the complete surveys examined by Coin World, one being Jan. 29 and the other as Feb. 1. Jurkowsky said the U.S. Mint expects to receive the results of the survey in early spring. ¦