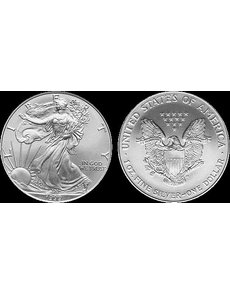 Silver American Eagles have emerged as the most popular collector series of the 2010s. As evidence, consider that 43 million American Eagle silver dollars were sold last year, a staggering number, the most ever. That means that in 2013, more than 5 percent of all silver mined in the world went into these coins. Wow!

Originally designed as a silver investment vehicle, American Eagle silver bullion coins almost immediately became popular with collectors who then went on to build date sets. The bullion coins have no Mint mark and are sold via a network of authorized distributors who buy them in large quantity from the Mint. They have been issued each year since 1986.

The Mint in 2006 created the Uncirculated version as a numismatic companion to the bullion coin, to be sold directly to the public. The two versions are almost identical, but the Uncirculated coins bear a Mint mark.

The most basic date set of Mint State American Eagle silver dollars, from 1986 to 2013, thus consists of 35 coins: 28 bullion issues plus one San Francisco and six West Point Mint-marked issues.

For the collector of these coins, condition is key. Fortunately, grading is generally straightforward. Marks and spots affect all issues of silver American Eagles. As large coins, they pick up contact marks and scrapes from coin-to-coin contact. Several areas on the coin are prone to marks that a cursory examination might not reveal.

These include Liberty’s neck and outstretched hand, the trailing edge of her skirt and ankle, and the mountains beneath the sun. On the reverse, arcing hairlines in the fields can be missed, unless the coin is rotated and examined at steep angles.

The main concern among all the coins is milk spots. The spots form as a results of detergents used to wash the planchets. If inadequately rinsed away, the detergent is struck into the coin. Not apparent at first, over time it causes the coin’s metal to discolor into an irregular milky-white haze or spots that cannot be removed. Not every coin is affected, but many produced during the middle and late-1990s are.