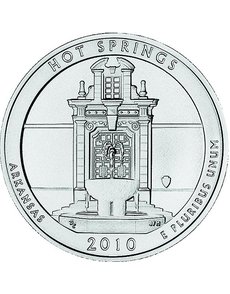 The Uncirculated 5-ounce silver collector version of the 2010-P Hot Springs National Park quarter dollar will replicate the same designs as the 24.3-millimeter circulating version, shown. Images of the 5-ounce silver versions of the coins were not available from the Mint.

The U.S. Mint has established a beginning price of $279.95 for the noon Eastern Time April 28 opening of its sales for the first of five 5-ounce .999 fine silver Uncirculated 2010-P America the Beautiful bullion quarter dollars.

The first coin to be offered directly by the Mint to the public commemorates Hot Springs National Park in Arkansas.

The price of $279.95 was announced April 12, although “as with all products sold by the United States Mint containing precious metals, pricing is subject to change,” according to Mint officials.

A total of 27,000 coins will be available for each of the five numismatic versions of the 2010-P America the Beautiful coins to eventually be offered via the Mint’s website at www.usmint.gov and by telephone at (800) 872-6468.

As of April 13, Mint officials had not yet disclosed ordering restrictions.

As additional details become available, Coin World will publish them at www.coinworld.com and in its print edition.

While both the Uncirculated and bullion version of each coin replicate the same basic designs of the 24.3-millimeter quarter dollar, the silver bullion version bears no Mint mark. The Uncirculated 5-ounce silver America the Beautiful version of each coin carries the P Mint mark on the obverse below the motto in god we trust just as it does on the standard 24.3-millimeter quarter dollars struck at the Philadelphia Mint.

Unlike the bullion version, the Uncirculated numismatic version of the 5-ounce silver coin receives a post-strike treatment resulting in a finish similar to what the U.S. Mint produces for 3-inch bronze medals.

The initial $279.95 price the U.S. Mint will be charging for the inaugural sales of the Uncirculated 5-ounce silver Hot Springs National Park coin is 95 cents higher than the price American Precious Metals Exchange, one of the Mint’s authorized purchasers (coin distributors), had charged customers during its pre-sale of 1,000 sets of its original 3,000 set allotment of the bullion coins without Mint mark.

APMEX’s $1,395 charge per set created such an uproar among collectors that complaints to the Mint resulted in the cancellation of the planned Dec. 6, 2010, launch of sales of the 2010 America the Beautiful silver bullion version until restrictions could be imposed for the Dec. 10, 2010, relaunch.

Those restrictions included limiting the authorized purchasers’ price for the bullion versions to no more than 10 percent above their purchase price from the Mint, adding shipping and handling, and restricting sales to U.S. customers only, and only one of each coin per household. ¦

An earlier version of this article incorrectly stated that the Yellowstone coin would be available at the same time as the Hot Springs coin.