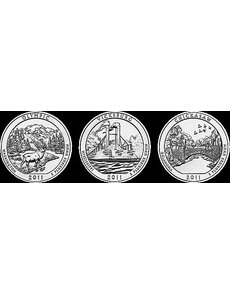 The U.S. Mint still has in its inventory at the Philadelphia Mint undisclosed numbers of three 2011 America the Beautiful 5-ounce silver bullion coins. The three coins still available are illustrated above.

Undisclosed quantities of three 2011 America the Beautiful 5-ounce silver bullion coins and 2011 American Buffalo 1-ounce gold $50 coins are being offered at reduced premiums by the United States Mint to its authorized purchasers.

The authorized purchasers were notified via email Jan. 7 by Greg Hafner, program manager of the U.S. Mint’s Precious Metal Group, about the availability of the Mint’s remaining inventory of the silver and gold bullion coins.

The Philadelphia Mint was scheduled to produce up to a maximum of 126,700 of each of the five 2011 America the Beautiful 5-ounce silver bullion coins.

The 2011 maximum mintages were nearly quadrupled from the 33,000 mintage for each of the 2010 issues, all of which sold out.

Tom Jurkowsky, director of the U.S. Mint’s Office of Public Affairs, said Jan. 7 that the Mint would not be releasing how many were remaining in inventory of each coin. To do so could lead to “speculative behavior,” Jurkowsky said.

The premium for the remaining gold $50 coins has been lowered to 2.4 percent above the spot price per coin, down from the usual 3 percent premium.

The premium for the 5-ounce silver bullion coins has been reduced to $8, from the usual $9.75 per coin over spot.

The authorized purchasers are the same specially qualified distributors who purchase the American Eagle gold and silver and American Buffalo gold bullion coins directly from the U.S. Mint for the spot price of the precious metal on a given day plus a small premium. The authorized purchasers then sell the bullion coins directly to the public, or to other dealers who may then sell the coins to the public. ¦