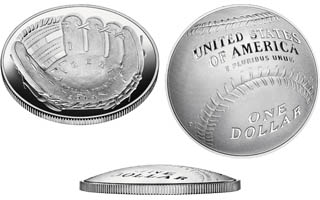 The curvature of the concave obverse and convex reverse is most extreme on the National Baseball Hall of Fame silver dollar. Shown is the Proof 2014-P version. 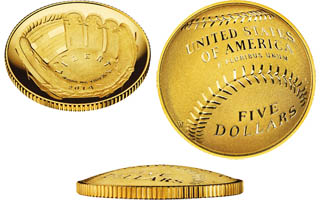 Collectors will be vying for the up to 50,000 gold half eagles to be offered. The Proof 2014-W coin is shown

The United States Mint has established pricing for the March 27 introductory sales of the three-coin 2014 National Baseball Hall of Fame Commemorative Coin Program.

The authorizing act, Public Law 112-52, calls for the production and sale, in Proof and Uncirculated versions, of gold $5 half eagles, silver dollars and copper-nickel clad half dollars.

The introductory sales period runs through 5 p.m. April 28, after which regular issue prices will be charged.

Prices for the coins, with the introductory price first, followed by the regular issue price, are:

The prices for the coins are higher than prices of recent commemoratives of the same denominations.

For example, the pricing for the Proof and Uncirculated Baseball silver dollars are higher than those charged for the 2014-P Civil Rights Act of 1964 silver dollars.

According to Michael White, spokesman for the U.S. Mint, “The costs for the National Baseball Hall of Fame silver coins are higher because we have to recover the R&D and production costs of producing a curved coin.”

Pricing for the Baseball Hall of Fame gold coins, tied to the price of gold and the Mint’s pricing grid, will be announced closer to the sales date.

No pricing information for the set has yet been announced.

The U.S. Mint has not announced whether it will offer any other special sets or ordering options.

At 11 a.m. March 27, the U.S. Mint will host a coin launch ceremony on Capitol Hill in Washington, D.C., featuring Hall of Fame second baseman Joe Morgan from the Cincinnati Reds. The ceremony will be held in the Russell Senate Office Building, Room 328A, which is the main hearing room for the Senate Agriculture Committee.

Morgan was one of five Hall of Famers who reviewed the proposed designs in the early stages of the public design competition that eventually resulted in the recommendation of the common obverse that the Treasury Department approved.

Surcharges, after the U.S. Mint recoups its production costs, are to be paid to the National Baseball Hall of Fame Museum to help finance the operations of the not-for-profit educational institution.

No household ordering limits are placed on the Baseball commemoratives.