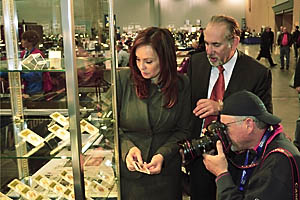 United States Treasurer Rosa Gumataotao Rios and Don Kagin of the California firm Kagin’s look at a selection of gold double eagles from the Saddle Ridge Hoard that were on exhibit at the American Numismatic Association National Money Show in Atlanta.

The gold coins in the Saddle Ridge Hoard are not stolen U.S. Mint property, according to the Mint and to two researchers.

Researchers Richard Kelly and Nancy Oliver have extensively researched the records of the San Francisco Mint. They have concluded there’s no possible way the hoard of gold coins, today valued at $10 million, discovered on a northern California property in February 2013 are those stolen from the facility by Mint employee Walter N. Dimmick in 1901.

Adam Stump, deputy director of the U.S. Mint’s Office of Corporate Communications, said via email March 6: “We do not have any information linking the Saddle Ridge Hoard coins to any thefts at any United States Mint facility.”

A March 4 article in the San Francisco Chronicle quotes Stump as saying, “We’ve done quite a bit of research, and we’ve got a crack team of lawyers, and trust me, if this was U.S. government property we’d be going after it.”

Dimmick was convicted and served prison time for stealing $30,000 face value in gold coins at the beginning of the 20th century.

The Saddle Ridge Hoard consists of 1,427 19th century gold coins found in eight metal canisters in California’s gold country. The majority of the coins, dated from 1847 to 1894, are Uncirculated Coronet gold $20 double eagles struck at the San Francisco Mint from 1855 to 1894.

The hoard is currently being marketed by Kagin’s, located in Tiburon, Calif.

Kelly and Oliver, frequent contributors to Coin World, state there is no truth to rumors that began circulating soon after the Feb. 25, 2014, announcement of the hoard’s existence that the coins from the hoard and those stolen by Dimmick are one and the same.

“As it is well known, Walter N. Dimmick, the Chief Clerk of the mint at the time, was arrested and served time for the crime of stealing six bags of double eagles, each bag consisting of $5,000 dollars of the denomination,” Kelly and Oliver said by email March 5.

“It is understandable why the two gold amounts of coin became confused with one another, because the number of pieces stolen by Dimmick almost equaled the number found in the Saddle Ridge Hoard.

“In fact, we had a brief thought along that line ourselves when the find was first announced. However, the dates on the coins (1847-1894) prove otherwise. The following additional facts will support that both hoards are not one and the same.

“First of all, and most importantly, the vault from which Dimmick stole the $30,000 in double eagles was the Cashier’s working vault. This vault was used for daily business transactions and would have only contained all denominations of coin made during that fiscal year ending June 30th, 1901. That means that all of the coins within that vault would have been dated 1900 or 1901. If the mint still had older issue coin it would have been stored in the basement vaults, or would have been melted or recoined by that time.

“Secondly, Dimmick stole only double eagles, and the recent discovery contained several other denominations, and mints.

“Lastly, had Dimmick known where the coins were, he most likely would have gone and retrieved them after he was released from prison, and lived for many years after that time.”

Rumors that the coins constituting the Saddle Ridge Hoard were the same ones stolen by Dimmick began appearing on the Mashable.com website soon after the hoard’s announcement. The theft speculation was picked up and published in newspapers and websites from around the world.

David McCarthy, senior numismatist at Kagin’s who has examined and researched the hoard since the firm was first contacted by the couple that discovered the coins, said he, too, had raised the question of the possible Dimmick link in early 2013 before receiving any of the coins for research.

“Most deposits with the Mints were bullion for recoining,” McCarthy said. “The chance of thousands of dollars of all uncurrent coins seemed doubtful.” ¦