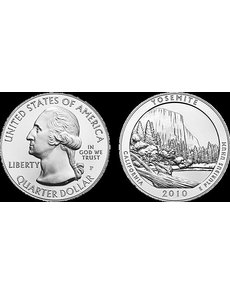 Orders were limited to one coin per household. The sale price is $279.95, the same price charged for the first two numismatic versions of the 2010-P 5-ounce silver America the Beautiful quarter dollars representing Hot Springs National Park and Yellowstone National Park.

U.S. Mint spokesman Michael White said June 9 that “though [the Mint website operated] a little slower than normal at noon when the product first went on sale, there were no significant system issues, with customers able to get online fairly easily within the first 15 minutes of sale.”

To order the coins or for more information, visit the Mint’s website at www.usmint.gov, or call its contracted order fulfillment center in Indiana at (800) 872-6468.

The 5-ounce silver coins are authorized under the same legislation that authorized the 56-coin America the Beautiful Quarters Program. The program calls for the issuance of coins bearing reverse designs honoring national parks or historic sites in each of the 50 states, the District of Columbia and the five U.S. territories. The coins are being released in the order in which the national park or historic site was first congressionally recognized.

While the enabling act calls for the issuance of a 5-ounce .999 fine silver bullion version, the U.S. Mint, at the discretion of the Treasury secretary, is also issuing a numismatic version.

Both versions are being struck at the Philadelphia Mint. The bullion coin bears no Mint mark, while the collector coin bears the P Mint mark. Both versions are struck on the same planchets supplied by Sunshine Minting from Coeur d’Alene, Idaho, except that the numismatic versions receive a post-strike finish.