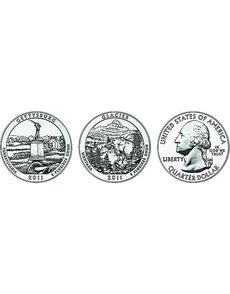 Authorized purchasers began placing orders with the U.S. Mint for the 2011 Gettysburg National Military Park and Glacier National Park 5-ounce silver bullion coins on April 25. Any coins allocated that were not ordered by 3 p.m. Eastern Time April 29 were to be put into a pool for reallocation May 2.

A different roster of the U.S. Mint’s authorized purchasers placed orders for the first two 2011 America the Beautiful 5-ounce silver bullion coins than participated in the 2010 program. Nine of the 12 authorized purchasers were approved to participate in the sale of the 2011 Gettysburg National Military Park (Pennsylvania) and 2011 Glacier National Park (Montana) coins.

The Mint’s authorized purchasers for the first two 2011 America the Beautiful 5-ounce silver bullion coins had until 3 p.m. April 29 to place their orders for 253,000 coins, evenly split between the two designs. Any unsold pieces were to be released into a pool of coins for all APs to seek on May 2.

The 2011 program currently offers 126,500 coins for each of the five designs to be released, with the proviso that additional coins could be struck and allocated to the APs if demand exists, according to U.S. Mint officials.

The authorized purchasers were not required to purchase their entire allocation on the first day of sales April 25, and some opted to take their allocation in multiple orders. Tom Jurkowsky, director of the U.S. Mint’s Office of Public Affairs, said as of the close of business April 25, the APs had already placed orders for 153,400 of the initial 253,000 coins available. Weekly sales figures for the 2011 program were to be released after 3 p.m. Eastern Time April 29.

Market pricing The 2011 program is not subject to the same sales restrictions that were imposed for the 2010 program. Therefore, the prices charged by the authorized purchasers to retail customers could vary widely, and it is possible that the APs may opt to distribute their allocation through wholesale transactions with secondary market distributors for sale to the public.

Under the 2010 program, the authorized purchasers could not sell their allocation to other dealers, but were limited to selling one coin per design per household. Also, the APs were prohibited from selling the coins to individual customers outside the United States for the 2010 program. The APs were also restricted from selling the 2010 coins for more than 10 percent above the spot price of silver, along with a $9.75 premium per coin, that they paid to the Mint for acquisition. The APs were permitted, however, to add a “reasonable” shipping charge to the total price charged to retail customers.

Most of the 2010 coins were sold by the APs in sets, at prices that ranged between $900 and $1,000 per five coins. For the 2011 program, while the Mint’s $9.75 premium per coin remains in effect, the APs will not be restricted in how much they may charge for a coin or the number of coins sold per customer. They may sell to both U.S. and foreign addresses and are not required to sell to the public. Restrictions were imposed for the 2010 program to prevent price gouging.

The price authorized purchasers will have to pay the Mint to acquire the 2011 coins will be considerably higher, since the spot price of silver has climbed from approximately $29 per ounce in December when the 2010 coins were offered to APs, to more than $45 per ounce as of April 29. The APs’ acquisition price from the Mint for the 2011 coins was to be the London PM closing spot price on the first business day after an order is received, times five ounces of silver, plus the $9.75 premium per coin. AP participation In order to participate in purchasing the first two 2011 5-ounce silver coins, those participating in the purchase of the 2010 coins had to document to the Mint by April 21 that they had sold their entire acquisition of 2010 coins.

Of the nine APs that participated in the 2010 program, seven certified they sold their coins according to the terms and conditions imposed by the U.S. Mint. Gaining the Mint’s approval to purchase 2011 coins does not mean the authorized purchaser is required to purchase the coins.

Commerzbank AG, a German-based company with offices in New York, did not participate in the 2010 program because of the restrictions barring sales to customers outside the U.S., but is approved for a 2011 allocation. Officials of Commerzbank AG had not responded to Coin World inquiries about how many 2011 coins, if any, it had ordered.

Contact the firm online at www.commerzbank.com or telephone it at (212) 266-7765. Officials at ScotiaMocatta, a division of the Bank of Nova Scotia in Canada, with offices in New York, also did not participate in the 2010 program, for the same reason as Commerzbank AG.

A company representative told Coin World April 27 that a decision had not yet been made on how many of the 2011 coins the firm would order from its allocation. Telephone the firm at (212) 225-6200 or visit it at www.scotiamocatta.com/. Deutsche Bank AG headquartered in Frankfurt, Germany, with U.S. offices in New York, chose not to participate in the 2010 or the 2011 program, according to U.S. Mint officials April 28.

The Mint also approved the following firms for allocations from the 2011 ATB program:

Participating firms A spokesman for The Gold Center said April 26 that the firm had placed orders for its entire allocation of 14,000 coins for each of the first two 2011 designs, but did not disclose how the coins would be distributed into the market.

Scott A. Hunt, president of Jack Hunt Coin Broker Inc., said April 28 that its 2011 allocation would all be resold wholesale to dealers. Hunt said the company had yet to confirm as of April 28 how much of its allocation it would be purchasing from the Mint.

A spokesman for MTB said April 27 that the firm had not decided whether it would be offering the coins wholesale or retail, or both. The MTB spokesman said the firm will not restrict the number of coins a customer may order, but will require that the order be for the same number of each coin, as the firm does not plan to sell any of the 2011 coins as singles.

Michael Haynes, chief executive officer for APMEX, said April 26 that the firm ordered its entire allocation. He said once APMEX receives its shipment, it will post notification on its website that coins are available.

Those customers who purchased 2010 ATB bullion coins or have signed up to purchase 2011 coins will be immediately notified by email of their availability, Haynes said.

FideliTrade President Jonathan B. Potts said April 26 that the company would purchase its entire 2011 allocation, but would place multiple orders in order to phase in sales. Potts said the 2011 coins would be offered both individually by design and as complete sets. Potts said a specific, undisclosed number of 2011 coins have been set aside for retail sales, with the remainder designated for wholesale distribution to dealers.

Purchasers given preferences for retail sales will be those who placed orders for 2010 coins, he said. The 2011 coins will be offered for shipment one of two ways — packaged in bubble wrap, or encased in plastic, Air-Tite holders, Potts said.

Phone calls placed to A-Mark and Coins ‘N Things Inc. were not returned by press time. Not immediately participating PB Financial Services Inc., New York, which participated in the 2010 program, is not participating in the direct acquisition from the Mint of the first two 2011 coins, since it still had some of the 2010 coins in its inventory, a company spokesman said April 27.

However, the firm is sold out of its 2010 allocation. Sid Reichenberger, a senior trader for Dillon Gage, said April 26 that the firm plans to resume participating directly with the Mint with the remaining 2011 coins for Olympic National Park in Washington, Vicksburg National Military Park in Mississippi and Chickasaw National Recreation Area in Oklahoma. Reichenberger said Dillon Gage is primarily a bullion wholesaler, and any orders placed by the public must meet a $5,000 minimum. That minimum was removed for the 2010 program because of the sales restrictions imposed then by the Mint. Contact Dillon Gage at www.dillongage.com or telephone it at (972) 386-2901.

U.S. Mint officials said April 28 that PB Financial Services and Dillon Gage would be able to participate in the 2011 sales “only after certifying that they have sold all 2010 coins in accordance with the terms and conditions set forth by the United States Mint. If additional Gettysburg and Glacier coins are made, these APs will also have access to those coins if they are certified and if and when the offer is made.” ¦