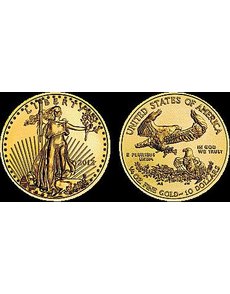 Part of the U.S. Mint’s reason for delay in the release of mintages for 2012 American Eagle and American Buffalo bullion coins is that quantities of 2012 quarter-ounce gold coins, shown, and 2012 half-ounce gold American Eagles still remain in inventory.

Mint spokesman Michael White said Sept. 12 that the delay in releasing the final mintage figures is partly tied to the bureau still having quantities of 2012 American Eagle quarter-ounce and half-ounce gold bullion coins in inventory. Mint officials would not disclose the number of unsold coins in inventory.

When final figures are released for the silver American Eagles, the Mint will disclose how many of the coins sold were produced at the West Point Mint and how many at the San Francisco facility, which began augmenting West Point Mint output in the spring of 2011.

Collectors and dealers used to anticipate final mintage figures for bullion coins of a given year being released by the Mint before the third week of January of the following year.

Over the past several years, however, release of final mintage figures by date for a previous calendar year’s bullion coins has been pushed to later in the year. The delay in releasing figures for the 2012 coins has been the longest.

Delays in the release of the final mintage figures have often been attributed to coins from the previous year remaining in inventory, unpurchased by the United States Mint’s authorized purchasers.

The authorized purchasers consist of a network of Mint-qualified dealers offering a two-way bullion market. They purchase the Mint’s bullion coins for the spot price per troy ounce of the metal on a given day plus a small premium. The coins are then resold to other dealers and the public.

Since 1986, when the American Eagle bullion coin program debuted, Mint officials have changed several policies involving sales of the coins.

Because of increased bullion coin demand, several years ago the Mint stopped the practice of allowing authorized purchasers to place orders for the following year’s issue, with shipping of the coins from the Mint beginning after Jan. 1.

Now, sales of a given year’s coins do not begin until after Jan. 1 of the calendar year for which the coins are dated.

In order to meet demand near the end of the year, the Mint continues production of a calendar year’s coinage through Dec. 31 of the year of issue, in addition to striking coins for the next year.

Then, any of the “older” coins remaining in inventory are sold into the new calendar year, with authorized purchasers required to take a certain number of the previous year’s coins along with the new year’s issue.

In some instances, the Mint has offered discounts to authorized purchasers to clear out remaining inventory from a previous year, to avoid having to melt unsold coins for metal reclamation.

Because of uncertainty over the unsold coins, the Mint has refrained from releasing final mintage figures for the 2012 American Eagle or American Buffalo bullion coins until the inventory for all options is exhausted.

Several months ago, the Mint revamped its website, and changed the way it posts sales figures and mintages online at www.usmint.gov.

Postings were formerly retrievable in one location for mintage by date for bullion coins, and ongoing sales totals were listed by year, with an easy link provided for all years from the same page.

Now, figures are accessed through a series of drop-down windows, each of which offers figures for a single year rather than a complete listing for all years.

Currently, the Mint offers individual cumulative calendar year sales for each year from 1986 through 2011 for American Eagles. The sales tables for the American Buffalo coins offer the same information for sales from the inaugural 2006 year through 2010. ¦